Robert Mugabe is only one who loves his statue. Everyone else thinks it’s ridiculous 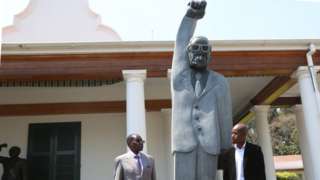 Zimbabwean President Robert Mugabe was presented with two statues that depicted him on Friday: one made by sculptor Dominic Benhura and another by a group of artists from the small town of Mashava.

According to the government-owned Zimbabwe Herald newspaper, the long-standing strongman leader was pleased with the artists’ efforts. “This is wonderful art, and the artists naturally are gifted people — absolutely gifted people,” Mugabe was quoted as saying.

However, the works produced quite another reaction online. In particular, the statue by Benhura — which showed a 12-foot-tall version of Mugabe clad in thick glasses with his hand raised to one side and teetering to his left — was widely criticized using the hashtag #MugabeStatue.

I refuse to believe that any effort was put into the creation of this statue. #MugabeStatue pic.twitter.com/Q1yo3MC94b

The poor chap is probably at Chikurubi prison by now #MugabeStatue pic.twitter.com/UPk8BgUlDH


One of the few defenders of the statue was Jonathan Moyo, minister of higher education in the Zimbabwean government and an outspoken voice on social media.

Zim spculptors have artistic freedom. Art's beauty is in the eye of the beholder. Benhura is a respected sculptor! https://t.co/gwR2cKeCF3


Moyo did have a point. Benhura is an accomplished Zimbabwean sculptor who has had his work exhibited around the world. Some wondered whether he could be mocking his leader. Speaking to the Herald in an interview published Monday, Benhura denied this, saying that it took six months to complete the artwork, which is representative of his style.

“This is the style I have mastered,” Benhura told the newspaper. “My collectors can identify my pieces when they see them anywhere in the world because I chose to be different and that is my signature.”

Mugabe has been the subject of online mockery before. The 92-year-old has led his country for 36 years, during which he has gained a reputation as an international pariah. Last year, when officials denied that he had fallen outside an event in Harare — despite the fact that the fall was caught on camera — social media users shared edited version of the image.
WASHINGTON POST