Angelina Jolie Pitt calls for U.N. leaders to find an end to the Syrian conflict 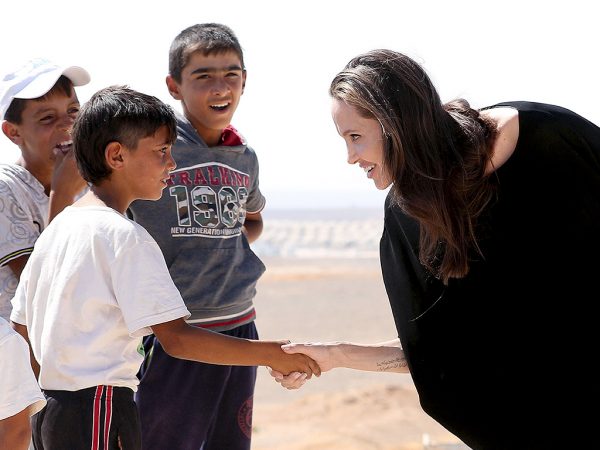 US actress and UNHCR special envoy Angelina Jolie talks to children as she arrives at a Syrian refugee camp in Azraq in northern Jordan, on September 9, 2016. / AFP / Khalil MAZRAAWI (Photo credit should read KHALIL MAZRAAWI/AFP/Getty Images)
Share:
Angelina Jolie Pitt is urging United Nations leaders to find an end to the Syrian conflict.

The actress and UNHCR Special Envoy held a press conference at the Azraq Refugee Camp in Jordan on Friday to emphasize the need for international aid for Syrian refugees, and met with families displaced by the crisis.

“It is almost impossible to fathom what the last five years have meant, in the lives of refugees in Jordan and elsewhere in the region,” Jolie Pitt, 41, said. “Not a single family in this camp of 60,000 people has not suffered loss and trauma.

“But as difficult as conditions are, refugees here count themselves among the lucky ones. Besides the millions trapped inside Syria whose lives are at risk daily, 75,000 Syrians are stranded in the Berm – a no-man’s land on the Jordanian border – including children, pregnant women, and gravely ill patients.

“They have had no food delivery since early August. There is next to no humanitarian access whatsoever. There is no mechanism for evacuating the war wounded. None of the basic protections under international humanitarian law are being applied.”

Jolie Pitt emphasized that the refugee situation is in no way the fault of Jordan – rather, she said, lawmakers around the world are to blame for failing to provide enough aid to refugees as the crisis rages on.

“So my message to world leaders, as they prepare to gather at the UN General Assembly in 10 days’ time, is to ask that the fundamental root causes of the Syria conflict, and what it will take to end it, are put at the center of the discussion,” she said. “Any increase in humanitarian funding saves lives and is deeply appreciated as well as absolutely necessary. But let’s be clear: aid workers here are still waiting for what was promised at the last conference.”

“After five years refugees do not want to know by what percentage their lives might be made fractionally more bearable, but when they will be able to go home. They do not want to be the passive recipients of aid, they want a political solution.”

Jolie Pitt gave a surprise speech at the U.N. summit in London just one day earlier, calling for an increased inclusion of women during the peacekeeping process.