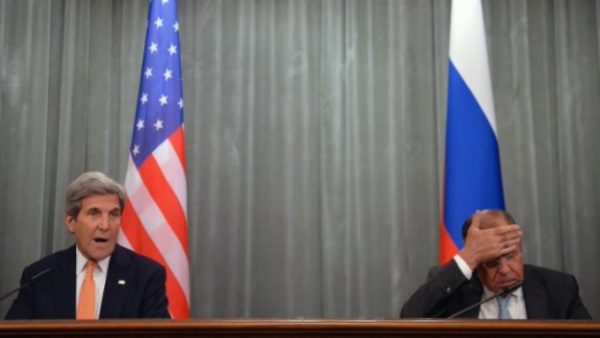 The complex Syria ceasefire deal agreed by US Secretary of State John Kerry and Russian Foreign Minister Sergei Lavrov faces numerous challenges, from the deep mistrust between rebels and regime to the web of actors drawn into the war.
Share:

The complex Syria ceasefire deal agreed by the US and Russia faces numerous challenges, from the deep mistrust between rebels and regime to the web of actors drawn into the war.

It aims to enforce a cessation of hostilities and increased aid access to desperate civilians, and lays the groundwork for joint US-Russia military action against jihadists.

Perhaps the most prominent obstacle to the implementation of the deal is deep mistrust between President Bashar al-Assad’s forces and rebel groups.

After five years of war, each side is sceptical of the other’s willingness to adhere to a ceasefire and previously attempted truces have failed.

Most recently, a cessation of hostilities brokered by the US and Russia in February led to a drop in violence on major fronts but frayed several weeks later.

Daily bombardment and indiscriminate attacks on civilians resumed, particularly in the battleground northern city of Aleppo.

Syria’s regime calls all its armed opponents “terrorists”, and Lavrov criticised the opposition for issuing “ultimatums, the refusals to cooperate, et cetera” as he announced the new deal Friday.

Charles Lister of the Middle East Institute warned rebels “have little faith in a long-term cessation of hostilities holding”.

Meanwhile, Syria’s opposition High Negotiations Committee said Saturday it did not trust the regime to commit to the truce without Russian pressure.

“We don’t expect the regime to (comply to the deal) of its own free will. We’re not counting on the regime at all,” said leading HNC member Bassma Kodmani.

As part of the deal, opposition groups must separate themselves from the powerful jihadists of the Fateh al-Sham Front, which changed its name from al-Nusra Front after breaking its ties to al Qaeda.

To fight off the regime, rebels and Islamist groups have allied themselves with Fateh al-Sham, particularly in the northern provinces of Idlib and Aleppo.

The HNC’s Kodmani said rebels had been forced to ally with jihadists because of the regime’s use of siege tactics, but they would break that alliance if the truce held.

“The moderate groups will reorganise and distance themselves from the radical groups. We will do our part,” she said.

But experts are more doubtful.

Lister said rebels had not indicated willingness to break off that alliance, which they see as “a military necessity”.

“To them, doing so means effectively ceding territory to the regime… It will be hard to change this mindset,” he said.

A web of actors

Syria’s war has seen the country carved out into zones controlled by competing forces: regime, rebels, Kurds and jihadists.

But it has also drawn in a myriad of regional and international powers on different sides of the conflict.

The deal won support on Saturday from Turkey, which is a key rebel backer but has recently repaired relations with regime ally Russia.

But steadfast Assad supporter Iran has yet to react.

“Ultimately, I’d argue that we also need Iran’s public agreement just as much as anyone else’s,” Lister wrote.

“If Tehran sees this (deal) as moving towards a US-Russian political compromise in Damascus, it may well prove to be an active spoiler.”

In announcing the agreement, Lavrov conceded there were “a lot of stakeholders involved inside and outside Syria — all that, of course, did not help us”.

And Syria’s crisis, Kerry said, “is complex for reasons that we all understand — the number of stakeholders with different agendas, the wounds that have been inflicted by years of fighting, the ideological and sectarian divides, the urban and suburban war zones, the brutality of extremists, and the unhelpful actions of some outside powers”.