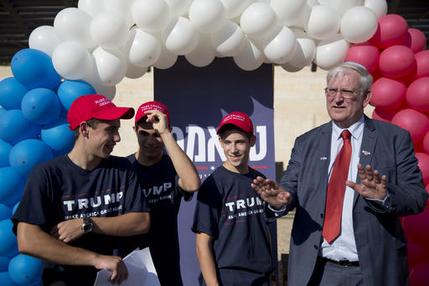 File – In this Monday, Aug. 15, 2016 file photo, Marc Zell, co-chairman of Republicans Overseas Israel speaks as the Republican Party launches its first ever election campaign in Israel in Modiin. Supporters of Republican candidate Donald Trump have set up a campaign office in a Jewish settlement in the northern West Bank, hoping to tap into the large numbers of American immigrants in the area for support. The operation, launched this week in the Karnei Shomron settlement, is one of several Republican outposts set up across Israel to get American expatriates to register to vote. (AP Photo/Ariel Schalit, File)
Share:

Republican activists are trying to “make America great again” – from inside a Jewish settlement deep in the West Bank.

This week, supporters of Republican presidential candidate Donald Trump have set up a campaign office in the Karnei Shomron settlement in the northern West Bank, hoping to tap into the large numbers of American immigrants in the area for support.

The office is in addition to several Republican outposts set up across Israel to get American expatriates to register to vote. A new location in Gush Etzion, a bloc of settlements near Jerusalem, is expected to open next week. It’s believed to be the first time either Republican or the Democrat activists have placed a campaign office in the West Bank.

Marc Zell, co-chair of Republicans Overseas Israel, said the get-out-the-vote effort is not just for show.

His group estimates there are about 300,000 American citizens living in Israel, including some 50,000 West Bank settlers. Zell hopes as many as 200,000 of them will register to vote. With the vast majority believed to be Republicans, he said there could be enough votes to influence results in swing states like Ohio, Pennsylvania or Florida.

“The total Israeli vote could make a difference, as it has in the past,” he said. In 2000, for instance, he said about 1,500 Americans here cast ballots in Florida for George W. Bush – enough to provide the razor-thin margin that propelled him to victory.

“Had they not been counted, he would not have been president,” Zell said. “It’s not academic speculation.”

Zell said the decision to locate outreach offices in the West Bank was not meant to make a “specific” political statement.

“But we’re not oblivious to the fact that having a campaign office there is going to attract attention. We’re comfortable about doing it,” he said.

Although the offices are not formal branches of the Trump campaign, he said they are “closely coordinated” with Republican officials in the U.S.

“We have a lot of grassroots support – no official offices, but so many supporters there that know Mr. Trump will be great for Israel,” she said.

While American Jews tend to vote for the Democrats, many living in Israel, particularly in the West Bank settlements, tend to be religious and socially conservative, with much more hawkish views toward the Palestinians.

Zell, who during the primaries opposed Trump, said he came to embrace the Republican nominee in large part because of his views on Israel.

Early in the campaign, Trump upset a gathering of Republican Jews by refusing to endorse Jerusalem as the undivided capital of Israel – a key Israeli position. Some of his other comments were seen by some as promoting Jewish stereotypes.

But since then, Trump has described himself as “very pro-Israel” and has taken up a host of positions endorsed by Israel’s hard-line government.

Trump has vowed to “dismantle” the U.S.-led nuclear deal with Iran, which was bitterly opposed by Israeli Prime Minister Benjamin Netanyahu. The Republican platform also says there should be “no daylight” between Israel and America.

In an about-face for Trump, the platform now calls for recognizing Jerusalem as Israel’s capital, a position that puts the campaign at odds with the international community and ignores the Palestinians’ claim to east Jerusalem as their capital.

The Trump campaign also appears to distance itself from the position of recent administrations – both Republican and Democrat – that opposed Israeli settlements in the West Bank and east Jerusalem.

While Trump’s platform makes no direct reference to the settlements, it rejects “the false notion that Israel is an occupier” and opposes any attempt to “impose an agreement or to dictate borders.”

The Palestinians seek both areas, captured by Israel in 1967, as parts of a future independent state alongside Israel – a position with U.S. and wide international backing. Trump has given no vision on what a future Israeli-Palestinian peace deal should look like, saying the two sides need to work it out themselves.

“He’s not coming here with preconceived notions about what to do,” Zell said. “This could be a real watershed in changing policy-thinking in Washington toward our region.”

Trump’s opponent, Hillary Clinton, has also reached out to Israelis, giving an interview to the country’s largest TV station broadcast Thursday. In the interview, Clinton said that Trump’s hostile rhetoric toward Muslims has strengthened jihadis. She also tried to assure Israelis that the U.S.-led nuclear deal with Iran is good for Israel. Many Israelis share Netanyahu’s skepticism about the deal.

Neither the Trump nor the Hillary Clinton campaign has appeared to reach out to the much smaller number of Palestinian-American voters in the region.

Sam Bahour, a prominent Palestinian-American businessman in the West Bank, said he had not heard of any outreach from either side. “Guess the incentive of the selection of candidates is a non-starter,” he said in an email.

The U.S. Embassy in Israel said it does not keep track of the number of Americans living in the region. But Sheldon Schorer, a prominent Democratic activist in Israel, agreed with Zell’s estimates of roughly 200,000 potential voters.

However, he said he expects most to support Clinton. Although local Democrats are less organized than the Republicans, he said party activists are also hosting registration drives and educational events.

“I know the Republicans are investing very heavily in this … but I don’t think they are going to get the results they want,” he said. “I think they will be disappointed today, partially because of the unattractiveness of their candidate.”