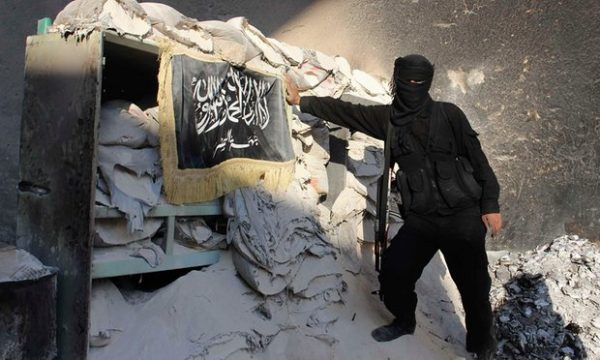 A fighter with Jabhat al-Nusra in Aleppo. The group changed its name to Jabhat Fateh al-Sham in July Photograph: Reuters
Share:

The top military commander of the militant group Jabhat Fateh al Sham, the former al Qaeda offshoot in Syria, was killed in an aerial raid that targeted a meeting of the group’s leaders, both the group and rebel sources said on Thursday.

The commander Abu Hajer al Homsi, whose alias is Abu Omar Saraqeb, was killed in a rural area of Aleppo province, they said, where the group has played an instrumental role in ongoing battles against the Syrian army troops and Iranian-backed Shi’ite militias in the gateway city of Aleppo.

An announcement by the group said he was “martyred” in an air strike in the countryside of Aleppo. The nationality of the jets that hit the location was not immediately known, but a rebel source said initial information suggested it was most likely a U.S. jet that struck the hideout.

Since the U.S.-led coalition was launched, air strikes have targeted Nusra Front figures in Syria, killing scores. But this marked the first time a key figure has been targeted since the group’s name change.

Abu Omar Saraqeb was a founding member of Nusra Front, Al Qaeda’s powerful Syrian branch, and had been among the jihadists who fought U.S. forces in Iraq after the U.S. invasion in 2003 before returning to Syria.

Along with other leaders, the jihadist figure set up Jaish al Fateh or the army of conquest – a military alliance of Islamist rebel groups that last year drove the Syrian army from the northwestern city of Idlib at the height of insurgents’ advances.

The major Russian military campaign at the end of last year turned the tide in Syrian President Bashar al-Assad’s favor and thwarted the Sunni insurgents’ rapid gains that brought them close to Assad’s minority Alawite stronghold on the coast.

Another Islamist insurgent source told Reuters the militants were present in a secret hideout in the village of Kafr Naha when the raid took place. The leader of the group Abu Mohammad al-Jolani was apparently not at the meeting.

Few other details emerged of the strike, but a photo of another top leader known as Abu Muslim al Shami circulated on social media showing him alive in an effort to refute reports he had also been killed.

The Nusra Front announced last July it was ending its relationship with al Qaeda, the global jihadist network founded by Osama bin Laden, to remove a pretext used by world powers to inflict civilian casualties.

The move appeared to be an attempt to appeal to Syrians who have long had deep misgivings about Nusra’s links with al Qaeda and the presence of foreign jihadists in its ranks.

The move was dismissed by Washington, which said it did not change its stance on the organization that is listed as a terrorist group and remained a fair target. Washington said altering the name of the group did not signal a shedding of its hardline al Qaeda-style ideology.

U.S. Secretary of State John Kerry and Russian Foreign Minister Sergei Lavrov have been trying to reach a deal on deeper cooperation between the U.S. and Russian militaries against radical groups operating in Syria, particularly Islamic State and the former Nusra Front.

One of the complications is that former Nusra operates side by side with Western-backed moderate Free Syrian Army (FSA) rebel groups in major frontlines against the Syrian army that is aided by heavy Russian air power and fighters from Iran-backed militias.