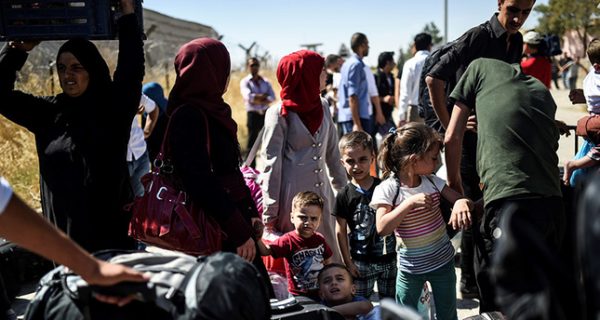 Syrian refugees on their way back to the Syrian city of Jarablus on Sept. 7
Share:

A group of 292 Syrians went back to the Syrian town of Jarablus from Turkey on Wednesday, marking the first formal return of civilians since Ankara launched a military incursion two weeks ago to try to secure the border region, a Turkish official said.

Jarablus, which had been held by Islamic State, was the first town captured by Turkey’s army and its Syrian rebel allies in an offensive launched on Aug. 24 that aims to sweep away jihadists and Syrian Kurdish militias from the frontier.

Turkey has said it cleared militants from a 90-km (56-mile) stretch of Syrian territory and has pushed south. It has also said it would support any U.S. initiative to strike Islamic State’s stronghold of Raqqa, further to the southeast.

But Turkey’s tactics have drawn criticism from its NATO ally the United States and also from Russia, with which it recently patched up ties.

“We call on Ankara to refrain from any steps which can further destabilize the situation in Syria,” Russia’s Foreign Ministry said in a statement.

Turkey, which hosts 3 million Syrian refugees, has urged world powers to back plans for a “safe zone” in north Syria to stem the flow of migrants and to allow Syrians to return home.

Although it has failed to win support for the idea, Ankara has pressed on with its offensive to carve out a swathe of territory under the control of the Turkish army and its allies, the Free Syrian Army, allowing some civilians to return home.

“The formal returns have begun today,” said a spokesman at the governor’s office for the southern Turkish province of Gaziantep, which lies across the border from Jarablus.

He said there were 292 people in the first group of registered returnees, including women, children and the elderly. More would be allowed to return but only gradually, he added.

“Turkey has supported us in every way until now, and has now saved our homeland,” said Fatima Mahmud, a mother who was among the group, told the Turkish newspaper Milliyet.

The United Nations has said an area can only be declared a “safe zone” if the protection of civilians can be guaranteed. It has previously cautioned against encouraging returns too soon.

“Currently, conflict lines are too insecure for many of the town’s displaced to return safely,” the U.N. humanitarian agency OCHA said in a report last week, referring to Jarablus which had a pre-war population of about 27,500 people.

South and west of Jarablus, Turkish forces have continued fighting. The deputy prime minister said four Turkish soldiers had been killed and 19 wounded in the two-week offensive.

Turkey has repeatedly demanded that the Kurdish YPG militia withdraw to the eastern side of the Euphrates, where there is a Kurdish-controlled canton. Ankara sees the YPG as an extension of the PKK which is fighting an insurgency on Turkish soil.

The YPG says its troops have long since withdrawn from areas being targeted by Turkish-backed forces. Canikli told a news conference on Wednesday that the YPG had not yet completely pulled back east.

Erdogan earlier said Obama had floated the idea of such cooperation during meetings at a summit of G20 leaders in China this week, the daily Hurriyet reported. The president had said a specific Turkish role would depend on further talks.