Pessimism about Trump, Clinton and the impact of the US election, poll 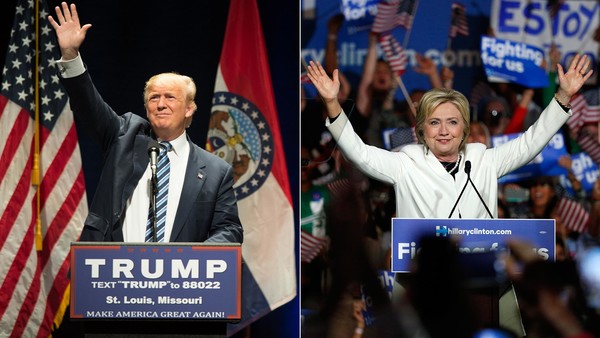 The presidential campaign has intensified long-standing political divisions, but there is one area of broad agreement among voters in both red states and blue states — a pervasive pessimism that no matter the outcome, the election will do little to unify the country, according to a Washington Post-SurveyMonkey survey of all 50 states.

But almost hidden behind those broad findings is another striking reality of America at the end of President Obama’s tenure in the White House. Those groups that fall roughly into the coalition that helped elect Obama to successive terms are more likely — in some cases significantly so — to say the country reflects their values more than it did in the past. Obama has pushed policies and taken executive actions that have played directly to that coalition.

The survey is the largest sample ever undertaken by The Post, which joined with SurveyMonkey and its online polling resources to produce the results. The findings from each state are based on responses from more than 74,000 registered voters during the period of Aug. 9 to Sept. 1. The extensive sample makes it possible not only to compare one state with another but also to examine the attitudes of various parts of the population, based on age, gender, ideology, education and economic standing.

Throughout the election year, various measures have highlighted the degree to which voters are unhappy, whether through measurements of the attributes of the two major-party candidates or in assessments of the direction of the country. Hillary Clinton and Donald Trump have lower favorability ratings than previous major-party nominees, and a sizable majority has said consistently that the country is seriously off track.

The Post-SurveyMonkey poll sought to assess the mood of the voters from several different angles in an effort to understand how worried voters are about the impact of a Clinton or Trump presidency on the country’s well-being “a great deal” or “a good amount.” The poll also attempted to capture how this fractious and boisterous campaign will affect the deep divisions that have defined politics for the past two presidencies.

At the same time, in a campaign in which national identity has become a central appeal of Trump’s message, and in a time when the tensions between factions of the electorate have intensified, the survey sought to understand how people see themselves against the backdrop of a changing America.

Only 4 percent nationally say neither would threaten the country’s well-being.

For some voters, the prospect of either Trump or Clinton provides a similar sense of alarm. Nationally, 21 percent say both candidates represent a threat to the nation’s well-being. That number peaks in Utah, where 38 percent cite both candidates as a threat.

The pattern across the states follows some predictable red-blue divisions. States with the highest percentages calling Trump a threat include such solidly Democratic states presidentially as Vermont, Hawaii, Maryland, Massachusetts, Oregon, Connecticut, Maine and California. Those most likely to say Trump represents a threat include women, younger voters, nonwhites, voters with college degrees or more and voters living in urban areas.

States with the highest percentages calling Clinton a threat are Wyoming, Idaho, North Dakota, Utah, Oklahoma, Kentucky, Alabama and Louisiana. Demographically, she is more likely to be seen as a threat by men, those in rural areas and whites, particularly with less education.

Pessimism about the aftermath of the election is broad and deep. Nationally, 68 percent of registered voters say the election will do little or nothing to reduce the divisions that have marked American politics for years now, while 30 percent say it will do “a good amount” or “a great deal” to reduce them.

Across every state, at least 54 percent offer a gloomy prognosis of the impact of the election on the political divisions. Ironically, on this question, Republicans and Democrats are united in their sense of foreboding about the future, with more than 6 in 10 in each party taking a dim view. Independent voters are even more pessimistic, with independent men the most acidic in their assessments.

Geographically, the pattern of concern is similar, with urban, suburban and rural voters united and with red and blue states mixed together at either end of the spectrum. The most optimistic states include Mississippi, Louisiana, South Carolina, Alabama, Hawaii, Florida, Kentucky and New York. The most pessimistic are Idaho, Vermont, Washington, Utah, Minnesota and Colorado.

Ideologically, those who identify themselves as very liberal are far more pessimistic than those who say they are very conservative, while African Americans, Hispanics and Asians are more optimistic than whites.

The question of whether the America of today reflects people’s own values produced split-screen results. On the one hand, there is broad agreement across the states that the country reflects people’s personal values less today than in the past. On the other hand, it’s clear that not all parts of the population view the country through the same negative lens.

There are some modest red-blue differences. In five deeply Republican states, at least 80 percent say America reflects their values less than in the past: North Dakota, Kentucky, Oklahoma, West Virginia and Wyoming. The least-negative states are Maryland, California, Oregon, Hawaii and Vermont — although in no case do more than 33 percent of people express a positive view.

Those patterns point to an underlying reality of how Americans are divided at the end of Obama’s presidency. Among age groups, the youngest are more likely to say the country reflects their values than the oldest, and the progression is steady across the age spectrum. African Americans are more likely than whites to say the country increasingly reflects their values, 40 percent vs. 23 percent — although a 58 percent majority of black voters nonetheless say the opposite.

The biggest differences come when the electorate is viewed through partisan and ideological lines. Among Republicans, 93 percent say the country reflects their values less today than in the past. Democrats, however, split evenly — 49-to-49 percent. Independents are less pessimistic than Republicans but far less optimistic than Democrats.

That contrast is even more stark when liberals are compared with conservatives. A majority of self-identified liberals say the country reflects their values more while about 9 in 10 conservatives take the opposite view. Moderates are in between.

Regionally, there is little difference in how people answer this question, with about 7 in 10 in every region saying their values are reflected less today. But where people live within those regions does make a difference. Just under a third of voters in urban areas, 32 percent, say the country reflects their values more than in the past, compared with just 18 percent of rural voters.

There is also a relationship between Obama’s approval ratings in individual states and how people perceive their values reflected in the country generally. Those states with the largest percentages saying the country reflects their values more than in the past are also states where Obama’s approval rating is highest. Still, in all states where Obama’s positive ratings are at least 55 percent, no more than one-third express a positive view about how well the country reflects their values.

This Washington Post-SurveyMonkey 50-state poll sample was drawn among the respondents who completed user-generated polls using SurveyMonkey’s platform from Aug. 9 to Sept. 1, and results are weighted to match demographic characteristics of registered voters in each state. No margins of sampling error are calculated, as this statistic is applicable only to randomly sampled surveys. For full question wording and methodological details, visit wapo.st/pollarchive .