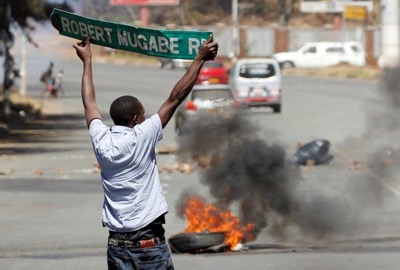 President Robert Mugabe warned protesters on Friday there would be no “Arab Spring” in Zimbabwe after anti-government demonstrations descended it to some of the worst violence seen in the southern African nation for two decades.

Zimbabwean police fired tear gas and water cannon at opposition leaders and hundreds of demonstrators at a protest against Mugabe and the ruling ZANU-PF, before unrest swept across large parts of the capital Harare.

“They are thinking that what happened in the Arab Spring is going to happen in this country but we tell them that it is not going to happen here,” Mugabe told state television, referring to a series of uprisings that toppled leaders across the Arab world.

Mugabe accused Western countries, including the United States, of sponsoring the protests.

“They are fighting because of Americans,” said Mugabe.

Earlier, opposition head Morgan Tsvangirai and former vice president Joice Mujuru fled a rally in their cars while protesters ran for cover as police broke up the core of the demonstration. However, anti-Mugabe leaders warned that this would be the first of a series of protests.

Mugabe’s opponents have become emboldened by rising public anger and protests over an economic meltdown, cash shortages and high unemployment. Mugabe, 92, has led Zimbabwe since independence from Britain in 1980.

Clashes spread through the streets of the capital Harare as riot police fought running battles with protesters who hurled rocks at officers, set tyres ablaze and burned a popular market to the ground, in some of the worst unrest since food riots in 1998.

Didymus Mutasa, a senior official from Mujuru’s party and convener of Friday’s protest, vowed to repeat the demonstration a week from now and blamed police for the violence and disobeying a court order allowing the march to proceed.

“If that was intended to cow us from demonstrating, I want to say the opposite has been the case. We are going next Friday to do exactly the same as we have done today,” Mutasa told reporters.

Most businesses shut down early on Friday fearing looting by protesters. Mujuru said 50 people were injured and hospitalized.

“Mugabe’s rule must end now, that old man has failed us,” said one protester before throwing a rock at a taxi.

More than a hundred police officers in riot gear, backed up by water cannons and armored trucks, occupied the venue that opposition parties planned to use for their demonstration.

As opposition supporters arrived for the march, they were told by the police to leave. The officers then fired tear gas and water cannon when parts of the crowd refused to comply.

Police spokeswoman Charity Charamba said the force was still assessing the day’s events. “We will let you know once we are done,” she said.

Officials from Mugabe’s ruling ZANU-PF party were unavailable for comment.

“Demonstrating is the only solution left to force the dictator out of office,” said Tapfuma Make, an unemployed 24-year-old from Chitungwiza town, south of Harare.

Zimbabwe’s High Court earlier ruled that police should allow the protest to proceed between 12 p.m. – 4 p.m. (6.00 a.m.-10.00 a.m. ET) in what Tsvangirai’s Movement for Democratic Change (MDC) called a “victory for democracy”.

“Today has been for me the worst day that I have lived in this country, where I have observed with my own eyes, the state breaking its own laws and the state starting violence by attacking people who were just gathered together,” Mutasa said.

Opposition parties leading the protests say the electoral agency is biased in favor of the ruling ZANU-PF and is run by security agents loyal to Mugabe, charges the commission denies.

The protesters want the next vote in 2018 to be supervised by international observers, including the United Nations. They are also calling for Mugabe to fire corrupt ministers, scrap plans to introduce local bank notes and end cash shortages.

The latest demonstrations come nearly two months after the biggest large scale ‘stay at home’ strike in Zimbabwe since 2007, inspired by social media movements such as #ThisFlag led by pastor Evan Mawarire.