Turkey backtracks on ‘ISIS group child bomber’ claims. No clue who was behind the attack 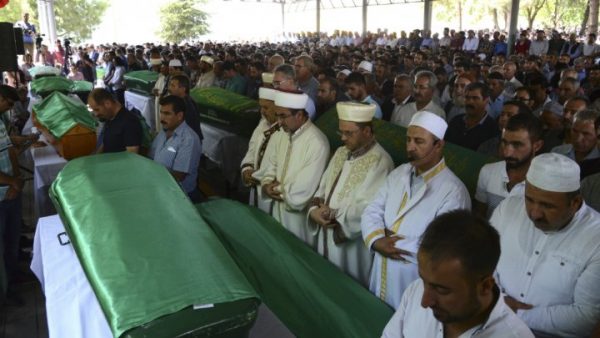 © Ilyas Akengin / AFP | Imams lead the prayers as mourners gather for the funeral of victims of an attack on a wedding party in Gaziantep in southeastern Turkey on August 21, 2016.
Share:

Turkey on Monday went back on claims that a child bomber linked to Islamic State (ISIS) jihadists carried out a deadly suicide bombing close to Syria, saying it had no clue who was behind the attack.

Turkish Prime Minister Binali Yildirim said Ankara could not confirm who was the perpetrator of the attack on a Kurdish wedding in the city of Gaziantep which left 54 dead, apparently contradicting President Recep Tayyip Erdogan who had said it was a child bomber acting on IS orders.

“We do not have a clue about who the perpetrators behind the attack were. Early information on who did the attack, in what organisation’s name, is unfortunately not right,” Yildirim told reporters in Ankara.

His comments were in stark contrast with those by Erdogan who said on Sunday that the bomber was a child aged between 12-14 acting on orders of IS jihadists.

Yildirim described as “rumours” whether the attack was conducted by a child or an adult, while insisting security agencies would continue their work to find out who was responsible.

“Those who were behind the attack will be revealed, there is no doubt about this.”

The Hurriyet daily said DNA tests were under way to ascertain the bomber’s identity, nationality and gender.

‘Strikes on IS, PYD’

Security forces believed jihadists had timed the attack as retaliation for offensives both by Kurdish militias and pro-Ankara Syrian opposition forces against IS in Syria, according to earlier Turkish press reports.

According to the Syrian Observatory for Human Rights, hundreds of rebel fighters were preparing inside Turkish territory to launch an offensive on the IS-held Syrian town of Jarablus.

Without explicitly confirming the rebel offensive, Foreign Minister Mevlut Cavusoglu said Turkeybacked anyone fighting against IS and would itself fight the group “to the end”.

“Our border must be completely cleansed from Daesh,” he said in televised remarks, using an Arabic acronym for the IS group.

Turkish army howitzers stationed inside Turkey fired on IS targets in the town of Jarablus and PYD targets around the area of Manbij, the reports said.

The majority of those killed in the wedding blast were children or teenagers, with 29 of the 44 victims identified so far aged under 18, media said.

The death toll rose to 54 after three more died in hospital in the early morning, the Dogan news agency reported.

Sixty-six people were still in hospital, 14 of them in a serious condition. Television pictures showed fire brigade workers hosing down the area of the attack with water in a clean-up.

The leader of the pro-Kurdish Peoples’ Democratic Party (HDP) Selahattin Demirtas said in a statement that “all of those killed were Kurds”.

The bride and groom — a couple from the strongly Kurdish region of Siirt to the southeast — were rushed to hospital but not seriously wounded.

The attack followed a string of strikes blamed on IS and Kurdish militants in recent months but if IS launched the attack, it would be the first significant jihadist action in Turkey since a failed July 15 coup.

Hurriyet said the type of bomb used — stuffed with 2-3 centimetre shards of iron and detonated with C-4 explosives — was similar to that used in previous suicide bombings against pro-Kurdish gatherings blamed on IS in the border town of Suruc and at Ankara train station last year.

The authorities were also looking for two individuals said to have accompanied the suspected suicide bomber into the wedding party but who then left the scene.

All 44 victims identified so far were laid to rest in harrowing ceremonies in Gaziantep on Sunday, with relatives throwing themselves on the coffins in grief, an AFP correspondent said.

The hillside graveyard was pock-marked before the ceremony with the holes of dozens of freshly dug graves for the victims.

One mother, Emine Ayhan, lost four of her five children in the bombing while her husband is in intensive care, the Yeni Safak daily said.

According to the list of victims in Turkish media, the youngest — named as Gurbet Akcan and Muhammet Yagiz — were both aged four.

The UN Security Council on Monday condemned what it described as a “heinous and cowardly terrorist attack”.