U.S. Waited for Iran to Release Prisoners Before Handing Over Cash, Report 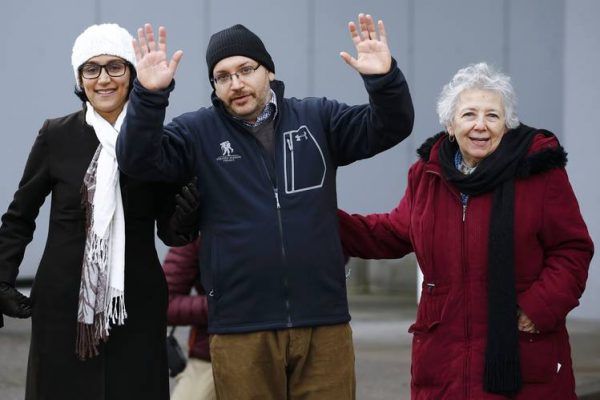 Jason Rezaian waves as he stands with his wife, Yeganeh Salehi, left, and his mother, Mary Rezaian, in Landstuhl, Germany, on Jan. 20, after being released from prison in Iran. PHOTO: KAI PFAFFENBACH/REUTERS
Share:
New details of the $400 million U.S. payment to Iran earlier this year depict a tightly scripted exchange specifically timed to the release of several American prisoners held in Iran.

The picture emerged from accounts of U.S. officials and others briefed on the operation: U.S. officials wouldn’t let Iranians take control of the money until a Swiss Air Force plane carrying three freed Americans departed from Tehran on Jan. 17. Once that happened, an Iranian cargo plane was allowed to bring the cash home from a Geneva airport that day.

But the handling of the payment and its connection to the Americans’ release have raised questions among lawmakers and administration critics.

The use of an Iranian cargo plane to move pallets filled with $400 million brings clarity to one of the mysteries surrounding the cash delivery to Iran first reported by The Wall Street Journal this month. Administration officials have refused to publicly disclose how and when the transfer took place. Executives from Iran’s flagship carrier, Iran Air, organized the flight from Tehran to Geneva where the cash—euros and Swiss francs and other currencies—was loaded onto the aircraft, these people said.

“Our top priority was getting the Americans home,” said a U.S. official. Once the Americans were “wheels up” on the morning of Jan. 17, Iranian officials in Geneva were allowed to take custody of the $400 million in currency, according to officials briefed on the exchange.

The payment marked the first installment of a $1.7 billion settlement the Obama administration announced it had reached with Tehran in January to resolve a decades-old legal dispute traced back to the final days of Iran’s last monarch, Shah Mohammad Reza Pahlavi. His government paid $400 million into a Pentagon trust fund in 1979 for military parts that were never delivered because of the Islamic revolution that toppled him.

Mr. Obama said on Aug. 4 the payment had to be in cash because the U.S. and Iran have no banking relationship, eliminating the possibility of a check or wire transfer.

One other U.S. citizen freed in the January prisoner exchange was released separately.

Republican lawmakers have charged that the payment equated to a ransom paid to gain the release of the Americans. Republican leaders said they are preparing to hold hearings on the cash transfer once Congress returns from its summer break in September. Rep. Sean Duffy (R., Wis.), chairman of a House investigative body, sent letters to the Justice and Treasury departments, as well as the Federal Reserve, on Aug. 10 requesting all records related to the Iran exchange.

Mr. Duffy asked Attorney General Loretta Lynch to identify all “persons within the [Justice] Department authorizing or otherwise taking steps to carry out the payment.” Senior Justice officials objected to the cash transfer due to fears it would be seen as a ransom payment, according to people familiar with the discussions.

Lawmakers have focused on the mechanics of the cash transfer to try to bolster their allegations that the delivery of the money was in exchange for the return of the jailed Americans.

One of the Americans released in January as part of the prisoner exchange, a pastor named Saeed Abedini, said he and other American prisoners were kept waiting at Mehrabad airport from Jan. 16 to the morning of Jan. 17. He said in an interview that he was told by a senior Iranian intelligence official at the time that their departure was contingent upon the movements of a second airplane. Mr. Abedini said he has been asked to testify next month before the House Foreign Relations Committee.

State Department officials have rebutted Mr. Abedini’s comments, saying the delay in his plane’s departure wasn’t related to a second plane or the payment of the $400 million. They said the delay was solely tied to U.S. efforts to locate the wife and mother of another imprisoned American, the Washington Post’s former Tehran bureau chief, Jason Rezaian, and ensuring they were allowed to board the Swiss plane as well.

Lawmakers are concerned the IRGC may have gained control of the cash once in Tehran. U.S. officials said they are not certain how Iran has used the $400 million that was returned.

The Treasury Department lifted sanctions on Iran Air on Jan. 16—the day before the cash and prisoner transfers— as part of the landmark nuclear agreement reached between Iran, the U.S. and other global powers. The U.S. has maintained sanctions on a second Iranian air carrier, Mahan Air, for its alleged role in facilitating arms shipments for the IRGC.

Obama administration officials have confirmed that they have paid the remaining $1.3 billion to Iran as part of the settlement reached in January on the failed arms deal. This marked the interest accrued over the past 37 years on the original $400 million paid by Iran, though administration officials have said it could have cost some $10 billion without the settlement.

U.S. officials have refused to disclose how the Obama administration made this additional payment. Lawmakers are seeking to determine whether this money was also paid in cash or if the Treasury Department was able to send it electronically.