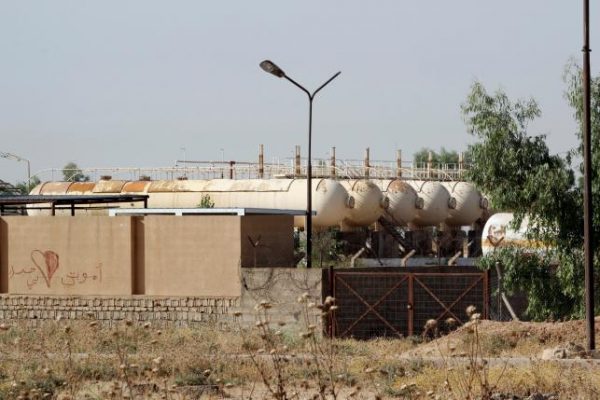 A view of the AB2 gas compressor station is pictured after militants attacked the station, northwest of Kirkuk, Iraq, July 31, 2016. REUTERS/Ako Rasheed
Share:

The first attack, on the AB2 gas compressor station, about 15 km (10 miles) northwest of Kirkuk, started around 0300 (0000 GMT) when four gunmen with hand grenades broke through an external door in an attack that left two guards in critical condition.

They then shot dead four employees in a control room inside and planted explosives charges, around five of which went off, the sources said.

Forces from the elite counter-terrorism service stormed the facility, regained control and freed 15 other employees who had hidden in a separate room.

There they launched a similar attack, one detonating his explosive vest at an external gate to allow the others to enter. Once inside the facility, two more assailants set off their explosive vests, destroying an oil storage tank.

The fourth assailant was later killed in clashes with security forces. An oil engineer was also killed and six policemen were wounded, security sources said.

The attack forced the suspension of activity at an oil station which had been pumping 55,000 barrels per day to the northern Kurdish region, oil sources said.

It was not clear when operations would return to normal. Kurdish peshmerga forces, which have controlled Kirkuk and surrounding areas for two years, were searching nearby villages for militants suspected of involvement in the attacks.

Amaq news agency, which supports Islamic State, said in a message distributed online that Islamic State fighters had stormed the Bai Hassan facility, but made no mention of the earlier attack.

The group has previously targeted oil facilities in the area with explosives, repeatedly targeting oil wells at Khabbaz oilfield southwest of Kirkuk.

The militants, who seized a third of the OPEC producer’s territory in 2014, have lost many areas to an array of Iraqi forces backed by U.S.-led coalition air strikes but still control the northern city of Mosul, their de facto capital in Iraq.