Assad tells Netanyahu: If you help me, I will guarantee Israeli security 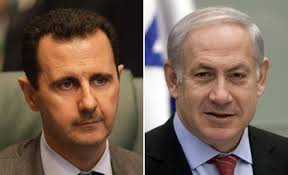 Putin and Assad  reportedly discussed the crisis in Syria as well as the possibility of a comprehensive peace agreement with Israel, including the Golan Heights, Al-Joumhouria reported, however the Kremlin denied the report.

“Help me to succeed in controlling my areas and I will guarantee security and peace for Israel in Golan on condition you don’t side with any party that wants to topple my regime ” , the daily quoted Assad as saying