Is Donald Trump, who Russians think will destroy the West, the Kremlin’s candidate? 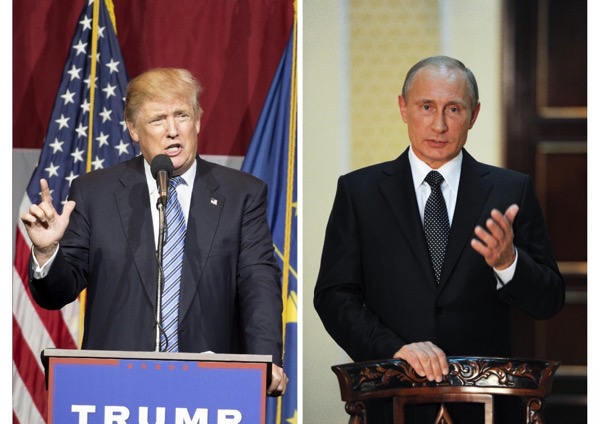 “Nations do not have permanent allies; only permanent interests,” said the father of German unification German chancellor Otto von Bismarck (1815-1898) in the 19th century. The words of this champion of “realpolitik” ring true today when one looks at the U.S. through the lens of the Kremlin. And yes, Donald Trump looms large in this scenario.

One big “permanent interest” since the end of World War II is the ideological war waging between Russia and the U.S. to win the hearts and minds of the rest of the world. It has not changed much since the collapse of Communism, though today, speaking with Moscow insiders, you get the idea that the Kremlin is getting a big kick out of sitting back and watching the West trip up on what Russian media dubs “Western hypocrisy” and the US elections.

“The aim of Russian foreign policy is to make the world more multi-power, not combining all the West into one vice under American leadership,” Alexander Baunov, senior associate at the Carnegie Moscow Center told me in an interview for this blog a few days ago in the Russian capital, highlighting the resonance of Donald Trump’s comments about potentially disavowing U.S. compliance with the NATO treaty.

Not surprisingly, the Kremlin is also pleased with the UK’s Brexit vote, as it removes the most outspokenly pro-American vice from the European Union, and shows another fissure in the Western façade. “Brexit makes the EU an easier partner,” says Baunov, “not like a branch of the U.S. And it gives Putin the chance to say to the West, ‘Now you see how unwise it is to trust important decisions to crowds,’” referring to the referendum. “In Russia we have democracy, but we control it,” Baunov suggests Putin would also like to say.

As it turns out, Trump the candidate and his persona is quite popular in Russia today. “Because he’s so bunt and so rude, the average Russian believes Trump is sincere,” Baunov continues, echoing U.S. Trump supporter sentiment. But the content of the message itself, opines Baunov, “embodies the crisis of Western institutions. They (the West) demand from us to be like them, but now you see Trump promoting the opposite values. It’s a dubious compliment to Trump for Russians to like him.”

And what about the Russian leader, Vladimir Putin, with whom Trump has been compared? “More things are ascribed to Putin than he really said about Trump,” Baunov says. “He called him “yarky” (Яркий – “bright” or “shiny” – perhaps we might say “charismatic”), but this is not a word of political support or explicitly wishing someone success; it is more an expression of someone’s ‘style.’” Indeed, the Russian president knows enough to keep silent on the election front. “He knows if he says something it will be used in the campaign,” Baunov continues. “And if he supports Trump. He has every reason to keep silent. The only reason to support him is to show the West isn’t the ideal place it pretends to be,” another not-so-oblique reference to Russia’s “permanent interests.”

Russia’s political TV news magazine shows – versions of, for example, Meet the Press, are largely supportive of the Trump candidacy. “The TV news magazines think Trump will destroy the West,” Baunov claims, adding that a certain paranoia still exists in Russia, perpetrated by Putin himself: “He fears the U.S. is plotting a ‘regime change’ in Russia.” That’s a far cry from the self-assured image the Russian president shows to the world.

Russian “intellectuals” – that segment of the population who criticize Putin – are shocked by the tone mainstream Western media has taken during the US election coverage, says Baunov. “What I’ve noticed is that some Russian anti-Putin intellectuals are unpleasantly surprised by the distortion, tone, exaggerations and substitution made by some American mainstream media that they used to consider solid and respectable. They now see that the tone and quality of thinking is not much better than in the worst Russian state-run media – for example, they mean that article (in The Atlantic) where it’s seriously written that Hilary is running against Putin.” Recently even editorial opinions and exchanges in responsible media such as the New York Times have dubbed Trump the “Kremlin’s candidate” because his strikingly negative view of the USA today and his suggested his future actions as President sound like Moscow’s agenda.

On A Par With Hillary?

While Messrs Putin and Trump may be equally matched on the machismo front, it is actually a Hillary Clinton presidency that apparently worries Vladimir Putin most. Having spent 15 years in power, the Russian leader likes to see himself as the world’s most-experienced senior statesman, having lived through wars, terrorism, economic crises, sanctions…someone who can run circles around younger, less-experienced politicians, such as the U.K.’s David Cameron. Hillary Clinton, however, is another matter: she had already been First Lady for several years when Putin was elected President in 1999.

“He has reason to be respectful,” says Baunov of Putin’s probable demeanor to a Clinton presidency. “Clinton could be an estimable (sparring) partner. He would see her as someone who is his equal…and Putin has a very high opinion of himself politically.”

Whoever is elected U.S. president will still have Putin to deal with. Baunov believes that barring any incipient “regime change” in Russia, or any personal health problems, the 64-year-old Vladimir Putin will again be a candidate for president in Russia’ s next scheduled elections in 2018. All perfectly legally, without further tweaks to the country’s constitution. “The constitution was already changed in 2012, when he became president again,” Baunov explains, referring to the four-year period when Putin served as Prime minister to the Presidency of Dimitri Medvedev. “This change allows a president to run for two consecutive six-year terms (note: not just “two four-year terms” as stated in the former constitution), so he is currently serving in term one of two terms.”

It is hard to imagine “candidate Putin” would not be re-elected in 2018 as he remains very popular at home. But Putin’s popularity – unlike Donald Trump’s – is not built upon charisma. “Putin’s succession is more procedural and legalistic than charismatic,” says Baunov. “It is not a popularity contest. Putin legitimizes himself. That’s why we still have elections.”