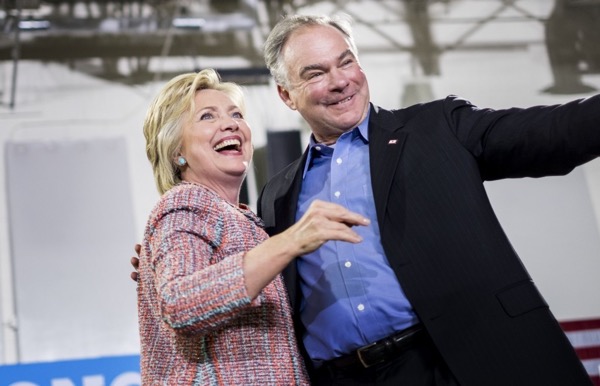 Kaine, 58, a former Virginia governor, Richmond mayor and Democratic National Committee chairman, was chosen after a search that included riskier and more unconventional candidates who offered greater appeal to the party’s liberal base.

He was a longtime favorite to become Clinton’s running mate, however, in part because of the political and personal attributes she considers well-suited to the governing partnership she seeks — and in part because of the calculation that the experience of a Clinton-Kaine ticket would outgun Trump’s outsider bombast.

Clinton notified supporters of her selection in a text message.

“I’m thrilled to tell you this first,” the text read. “I’ve chosen Sen. Tim Kaine as my running mate. Welcome him to my team.”

Kaine, who was in Rhode Island for a long-scheduled fundraising party, responded to the selection with a Twitter message.

“Just got off the phone with Hillary. I’m honored to be her running mate. Can’t wait to hit the trail tomorrow in Miami!”

Kaine is not known for his charisma on the campaign trail; he has called himself the “happy senator” and even “boring” — and Clinton laughingly agreed in a PBS interview earlier this week.

“I love that about him,” she said Monday.

“He’s never lost an election. He was a world-class mayor, governor and senator, and is one of the most highly respected senators I know,” she said.

Along with his image as a low-key workhorse, Kaine brings legislative experience in the Senate and executive experience as a popular if unremarkable governor. He comes from a battleground state, albeit one widely considered winnable for Clinton whether Kaine is on the ticket or not.

Clinton has said that her most important criterion was the ability to step into the presidency at any moment. She also sought a running mate who would be able to work with Republicans to advance an ambitious legislative agenda that includes immigration reform and new gun-control measures, her campaign said.

Kaine’s affable, regular-guy presence may also help balance the perception of Clinton as remote, chilly and privileged. She is among the least-liked major party candidates in decades, according to public opinion polls, behind only Trump.

Clinton’s choice comes as she and the Democratic Party prepare for a four-day convention that will showcase her résumé and experience. It’s a counterpoint to what Democrats say are Trump’s lack of credentials.

With Kaine, Clinton hopes to focus the election even more squarely on the question of preparation and ability. Kaine shares Clinton’s governing philosophy. They share a basic ideology that government can do good and that the United States should be both a moral actor and an engaged diplomatic and military presence overseas.

She is also counting on him to be a partisan attack dog somewhat in the model of Vice President Biden.

Trump focused intensely on Clinton during his speech in Cleveland Thursday accepting the Republican nomination, calling her corrupt and incompetent and accusing her of making the country less safe as secretary of state.

Even before it was announced, Kaine’s pick was panned by several liberal groups, including some with ties to Sen. Bernie Sanders of Vermont, the runner-up in the Democratic primaries.

In recent television interviews, Sanders has praised Kaine, but some of his supporters have sharply questioned his progressive bona fides, pointing to Kaine’s support of trade deals and regulations favorable to big banks.

Charles Chamberlain, executive director of the activist network Democracy for America, which backed Sanders in the primaries, said Thursday that it should be “disqualifying” for any potential Democratic vice-presidential nominee to “help banks dodge consumer protection standards.”

And on Friday, Norman Solomon, the coordinator of a group billing itself as the Bernie Delegates Network, called Kaine “a loyal servant of oligarchy.”

“If Clinton has reached out to Bernie supporters, it appears that she has done so to stick triangulating thumbs in their eyes,” said Solomon, whose organization claims to represent hundreds of Sanders delegates attending the convention in Philadelphia but is not coordinating with the campaign.

Kaine was in New England on Friday afternoon attending a pair of fundraisers, one in Boston to benefit his Senate campaign account and another in Rhode Island on behalf of Sen. Jack Reed, a fellow Democrat.

Kaine did not share anything about the status of the search Friday with reporters who staked out his home in Richmond or caught up with him at Logan Airport in Boston.

Clinton, meanwhile, was making several campaign stops in Florida on Friday. She began in Orlando, a city that is still reeling from a terror attack at a gay nightclub that left 49 people dead.

She was held a rally in Tampa later in the day. On Saturday, she is expected to appear at another rally at Florida International University in Miami. For now, her public schedule is clear after that until a Monday appearance in Charlotte.

Clinton told Democrats that she wanted to choose someone who would work to elect other Democrats and raise money for Democrats nationally. Kaine has a track record of doing both, and is a solid speaker who will perform well in debates and interviews, said Daniel Palazzolo, chairman of the University of Richmond’s political science department.

“He has a broad range of governing experience, most importantly. I don’t think that should be understated, especially this year” against Trump, who has never held elective office and promises to bring a businessman’s perspective to the White House.

Trump selected Indiana Gov. Mike Pence as his running mate, a choice that added to the Republican ticket someone with experience and a résumé with parallels to Kaine’s.

Representing a state with a large military presence and defense industry has burnished Kaine’s national security experience, and he serves on the Senate Armed Services Committee as well as the Foreign Relations Committee. He won admiration within the military and jolted Democrats when he pushed for congressional consideration of a new war authorization for the conflicts in Iraq and Syria. In 2015, he joined Sen. Jeff Flake (R-Ariz.) to seek a new three-year authorization for military force. The effort stalled, but it raised Kaine’s stature.

Kaine speaks Spanish, but his selection represents a disappointment for Hispanics and others who had hoped that Clinton, the first woman to head a major-party ticket, would choose the first major-party Latino running mate. Hispanics are a key constituency for Democrats this year, and Clinton’s election strategy has long been built around engaging women and Hispanics.

The president considers Kaine “one of his as well,” even though he did not serve in the Cabinet.

“Senator Kaine is one of the first public officials to announce a public endorsement of Senator Obama. Senator Kaine served as the chair of the DNC during President Obama’s first year in office. And Senator Kaine is somebody that the president deeply respects, and — I think it’s been publicly reported — was even considered himself as a running mate back in 2008,” Earnest said.

Kaine is Roman Catholic and took a break from Harvard Law School to serve as a missionary in Honduras in the early 1980s. He said he holds “traditional Catholic” views on abortion, but he maintains that he strongly supports abortion rights. He has taken a similar stand on the death penalty, saying he opposes it for personal and religious reasons — but promising as governor to uphold the law of Virginia, where capital punishment is legal.

Kaine’s emphasis on faith in his personal life appealed to Clinton, a Methodist, and was discussed during conversations the two held leading up to his selection, a Democrat with ties to both of them said.

“I do what I do for spiritual reasons,” Kaine said in a recent C-SPAN interview.

Republicans are likely to seize on Kaine’s somewhat mixed message on abortion as well as his unsuccessful attempt as governor to raise transportation taxes.

But he has few other known personal or political liabilities, a safe and steady choice whose departure from the Senate would not cause an immediate loss for Democrats. Virginia Gov. Terry McAuliffe (D) would name a replacement ahead of a special election in 2017. The winner would have to run again for a full six-year term the following year.
Kaine was given an audition of sorts on the trail last week, when he joined Clinton at a campaign stop in a gymnasium at a community college in Northern Virginia.

The two were warmly received by the crowd and had an easy rapport, though the atmosphere was not nearly as electric it had been the month before when Clinton was joined at a rally in Ohio by Sen. Elizabeth Warren (D-Mass.), a darling of the party’s left wing.

Early in his remarks, Kaine broke into Spanish, explaining how the meaning of the slogan “Ready for Hillary” takes on even more significance in that language than in English.

Clinton, who was perched on a stool nearby, broke into a big smile as Kaine ticked off what he described as crucial differences between Clinton and Trump.

“I really love what Tim said,” Clinton told the crowd when she took the microphone. “I like the three questions he posed. . . . What Tim said is really worth considering.”