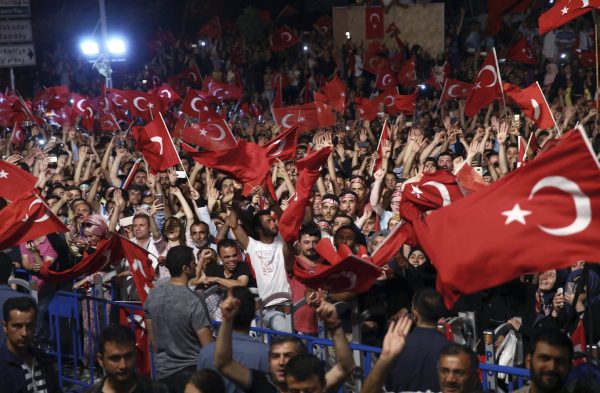 Turkey’s state-run news agency said Tuesday that courts have ordered 85 generals and admirals jailed pending trial over their roles in a failed coup attempt. Dozens of others were still being questioned.

Anadolu Agency said those formally arrested include former air force commander Gen. Akin Ozturk, alleged to be the ringleader of the July 15 uprising, and Gen. Adem Hududi, commander of Turkey’s 2nd Army, which is charge of countering possible threats to Turkey from Syria, Iran and Iraq.

Ozturk has denied the allegation, saying he neither planned nor directed the coup, according to Anadolu.

Authorities have rounded up thousands alleged to have been involved in the coup, which killed 208 government supporters and 24 coup plotters. The government says a U.S.-based Muslim cleric was behind the coup. Thousands of officials suspected of links to him were purged from the judiciary and the Interior Ministry.

“No democracy shall allow for soldiers, prosecutors, police, judges, and bureaucrats, to take orders from an outside organization instead of the institutional bureaucracy,” President Recep Tayyip Erdogan said in remarks broadcast early Tuesday.

The president and other officials have strongly suggested the government is considering reinstating the death penalty, a practice abolished in 2004 as part of Turkey’s bid to join the European Union.

“In a country where our youths are killed with tanks and bombs, if we stay silent, as political people we will be held responsible in the afterlife,” Erdogan said, pointing out that capital punishment exists in several countries around the world, including the United States and China.

Speaking in parliament, the chairman of the opposition Nationalist Movement Party, Devlet Bahceli, said his party would back legislation to re-introduce the death penalty if it was put forward by the ruling Justice and Development Party. Erdogan will need opposition support to pass such a measure.

Pro-government crowds, which have rallied at major squares every night since Friday’s coup, have been clamoring for traitors to face capital punishment.