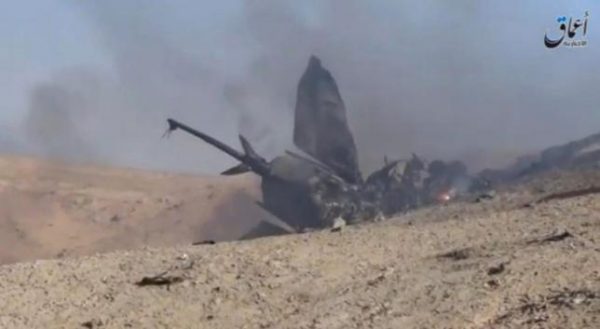 A still image taken on July 14, 2016 from a video posted on social media said to be shot today, July 14, 2016, shows the wreckage of a Syrian jet that was brought down by Islamic State fighters near the eastern city of Deir al-Zor, Syria. Social Media
Share:

Amaq agency released video footage showing the flaming wreckage of a plane scattered across a stretch of barren rocky ground, as well as parts of a corpse in military uniform and a white helmet, hung out for display on a street. It said the body was that of the pilot.

The Syrian Observatory for Human Rights, a British-based organization which monitors Syria’s war through a network of sources inside the country, said Islamic State had targeted and brought down the plane in the Thardah hills, about 3 miles (5 km) southwest of Deir al-Zor military airport.

Islamic State controls most of the eastern province of Deir al-Zor, though forces loyal to President Bashar al-Assad hold the airport and part of Deir al-Zor city on the Euphrates river.

It was not immediately clear how the militants downed the jet, which the Observatory said was the second jet to be brought down over Islamic State territory since April. It said Islamic State had also brought down two helicopters in recent months.