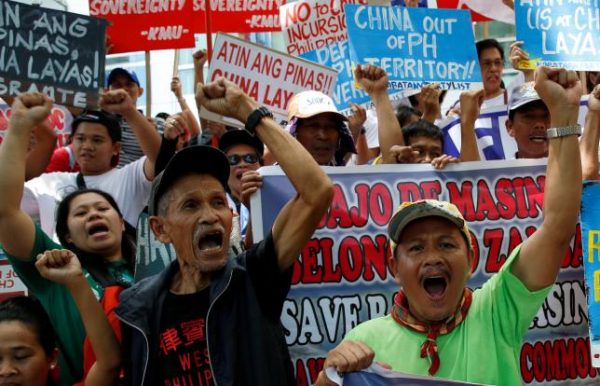 China vowed to take all necessary measures to protect its sovereignty in the South China Sea and said it had the right to set up an air defense zone, after rejecting an international tribunal’s ruling that denied its claims in the region.

State media called the Permanent Court of Arbitration in the Hague a “puppet” of external forces, after it ruled that China had breached the Philippines’ sovereign rights by endangering its ships and fishing and oil projects.

China has repeatedly blamed the United States for stirring up trouble in the South China Sea, where its territorial claims overlap in parts with Vietnam, the Philippines, Malaysia, Brunei and Taiwan.

“China will take all necessary measures to protect its territorial sovereignty and maritime rights and interests,” the ruling Communist Party’s official People’s Daily said in a front page commentary on Wednesday.

The case, overseeing an energy-rich region that is home to also one of the world’s busiest trade routes, has been seen as a test of China’s rising power and its economic and strategic rivalry with the United States.

Beijing called the Philippines claims of sovereignty in the South China Sea “baseless” and an “act of bad faith”. In a government white paper published on Wednesday China also said its fishing boats had been harassed and attacked by the Philippines around the Spratly Islands.

“On whether China will set up a air defense zone over the South China Sea, what we have to make clear first is that China has the right to…But whether we need one in the South China Sea depends on the level of threats we face,” the Vice Foreign Minister Liu Zhenmin told reporters in Beijing, adding that China hopes to return to bilateral talks with Manila.

U.S. officials have previously said they feared China may respond to the ruling by declaring an air defense identification zone in the South China Sea, as it did in the East China Sea in 2013, or by stepping up its building and fortification of artificial islands.

The Philippines reacted cautiously to the ruling late on Tuesday, calling for “restraint and sobriety”.

Philippine President Rodrigo Duterte held a cabinet meeting after the ruling was announced, but no comment was made about the what was discussed and the presidential palace canceled a regular briefing on Wednesday.

One of the lawyers who argued the Philippines’ case said that though the decision had been delivered, how and when the country would enforce the decision was complicated and unclear.

“There’s no timeline for this game, it might have an extended period of gestation,” said Florin Ternal Hilbay, a former solicitor general.

“I would assume our diplomats have read the decision and understand the complexities and consequences of enforcing the decision.”

But in moves likely to antagonize Beijing, the coastguards of Japan and the Philippines took part in simulated rescue and medical response exercise off Manila Bay on Wednesday, part of what the two countries have called efforts to improve maritime security and combat crime and piracy.

Japan and China are involved in a separate territorial dispute in the East China Sea and Beijing has warned Tokyo against meddling in the South China Sea dispute.

“It will certainly undermine and weaken the motivation of states to engage in negotiations and consultations for solving their disputes,” Cui said at a forum of the Center for Strategic and International Studies (CSIS) in Washington. “It will certainly intensify conflict and even confrontation.”

President Barack Obama’s top Asia policy adviser, Daniel Kritenbrink, said the United States had no interest in stirring tensions in the South China Sea as a pretext for involvement in the region.

“We have an enduring interest in seeing territorial and maritime disputes in the Asia Pacific, including in the South China Sea, resolved peacefully, without coercion and in a manner that is consistent with international law,” Kritenbrink said at the same forum.

Taiwan President Tsai Ing-wen boarded a navy frigate in southern Taiwan ahead of its departure for the South China Sea early on Wednesday, a regular patrol mission that was pushed forward by a day due to the Hague decision, which Taipei rejected.

“This patrol mission is to show the determination of the Taiwan people to defend our national interest,” Tsai said from the warship.