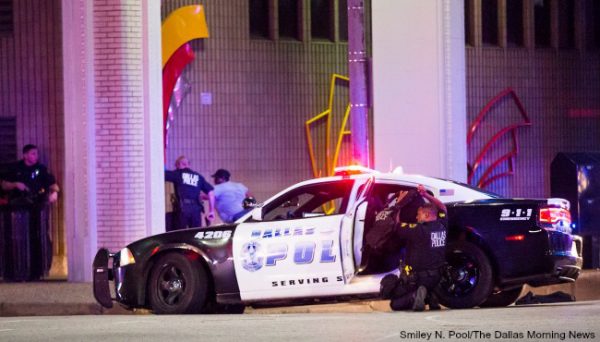 President Barack Obama said Friday that America is “horrified” by what appears to be a planned sniper shooting targeting police officers in Dallas, and he said there is no justification for the violence.

In a brief statement to reporters, Obama said the investigation into the shooting continues but “what we do know is there has been a vicious, calculated and despicable attack on law enforcement,” he said.

Obama called the shooters motives “twisted” and vowed that “justice will be done.”

“There’s no possible justification for these kinds of attacks or any violence against law enforcement,” Obama said, noting that he had spoken with Dallas Mayor Mike Rawlings and offered his support and condolences.

Immediately after landing in Warsaw, and before the shootings, Obama had expressed solidarity with protesters earlier. In those comments, he aired his frustration with what he said were racial disparities in the criminal justice system.

He also argued there was no contradiction between supporting law enforcement and working to see that biases in the justice system are rooted out.

Similar statements about other shootings have stoked tensions with law enforcement, including with FBI Director James Comey, who has suggested the intense public focus on police officers’ conduct, fueled by caught-on-camera moments, may be inhibiting officers as they try to protect their communities.

Aiming to pre-empt that concern, Obama said that speaking out about the issue is not an attack on police. He emphasized prior to the shootings that he and other Americans appreciate the risks police officers take and mourn officers who die in the line of duty.

Obama emphasized another part of that message later Friday. He called the shootings a “wrenching reminder of the sacrifices” that police office make every day.