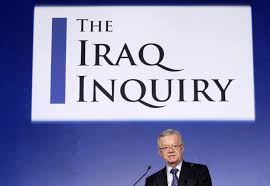 The head of Britain’s Iraq War inquiry released a damning report on Wednesday, saying the conflict was based on flawed intelligence, executed with “wholly inadequate” planning and ended “a long way from success”.

Retired civil servant John Chilcot, who oversaw the seven-year-long inquiry, said the UK “chose to join the invasion of Iraq before the peaceful options for disarmament had been exhausted”, adding: “Military action at that time was not a last resort.”

The report runs to 2.6 million words – about three times the length of the Bible – and includes details of exchanges Blair had with then US president George W. Bush over the invasion.

“It is now clear that policy on Iraq was made on the basis of flawed intelligence and assessments. They were not challenged and they should have been,” Chilcot said in presenting its findings.

Chilcot said then prime minister Tony Blair’s government presented an assessment of the threat posed by Saddam Hussein’s weapons with “certainty that was not justified”. He also found military planning for the war and its aftermath were not up to the task.

“The people of Iraq have suffered greatly” because of a military intervention “which went badly wrong”, he said. But he refrained from specifying whether the 2003 invasion was legal, and did not find that Blair and his government knowingly misled Parliament or the British public.

Iraq remains in chaos to this day. The Islamic State (IS) group controls large areas of the country, and 250 people died on Saturday in Baghdad’s worst car bombing since the US-led coalition toppled its former dictator.

The inquiry looked at the reasons for the invasion, the war itself and the aftermath – and has taken longer to complete than the British military involvement itself, in which 179 British soldiers died.

Earlier public hearings, including two appearances by Blair, ended in 2011 but since then the writing of the report has been dogged by rows over the release of secret government files and the contacts between London and Washington. It includes details of notes from Blair to Bush and quotes from more than 130 records of their conversations.

Critics believe that Blair, who sent 45,000 British troops for the invasion, gave Bush an unconditional promise that Britain would join military action and that he then distorted intelligence to put pressure on government lawyers to give the invasion legal approval.

Blair has always rejected any suggestion that he acted dishonestly.

“The report should lay to rest allegations of bad faith, lies or deceit,” Blair said in an initial response on Wednesday. “Whether people agree or disagree with my decision to take military action against Saddam Hussein, I took it in good faith and in what I believed to be the best interests of the country.”

“I will take full responsibility for any mistakes without exception or excuse,” he said, adding that he would respond more fully in a later statement.

Prime Minister David Cameron said lessons must be learned following the publication of the long-awaited report, but noted that some of the mistakes outlined had already been addressed in the years since the invasion. For example, there are now separate mechanisms for assessing intelligence and deciding upon its use.