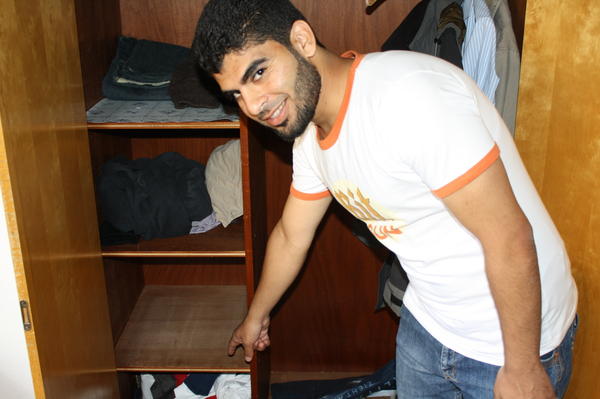 Muhannad M. stands to get a reward of less than $5,000, after turning in some $150,000 in cash and bank documents that he found in a used piece of furniture.
Share:

Eight months after he entered Germany as a refugee from Homs, Syria, Muhannad is being praised as a hero by local police for his honesty. The $55,000 he found in a wardrobe that was donated to him to furnish his apartment could have helped him get his two younger brothers out of Syria and into a new life in Germany. But he tells Germany’s Bild newspaper that he couldn’t do that.”I am a Muslim. I’m not allowed to keep this money. My religion forbids it,” he said. “Allah would never allow me to finance my own interests with someone else’s wealth.”

Germany – Not all heroes wear capes. A Syrian refugee living in Germany was praised by the local police after committing an act of selflessness.

The Syrian man, referred to by the German newspaper Bild (German) as Muhannad M., had fled from the violent city of Homs and was living in an apartment in Minden, just west of Hanover. A wardrobe was donated to him, and as he was setting it up, Muhannad found a hidden pouch on the side of one of the shelves. In it, he found 50,000 euros ($55,24o) in cash, along with passbooks for bank accounts which would have 100,000 euros ($110,480).

Rather than keep the money, the man was insistent on turning it in to the police, even going so far as to check that the cash—which he found in 500-euro notes—was not counterfeit.

According to news site The Local, Muhannad cited his religious faith as one of the reasons why he could not keep the money. “I am a Muslim. I’m not allowed to keep this money. My religion forbids it,” he said. “Allah would never allow me to finance my own interests with someone else’s wealth.”

Police are working to locate the original owner of the money. The Local reports that Muhannad will receive a finder’s fee worth 3% of the money he turned in.

“This young man has acted in an exemplary way and deserves great respect,” said a police spokesperson, according to the Local. “It sometimes happens that smaller amounts of money are handed in. But this kind of money is the absolute exception.”