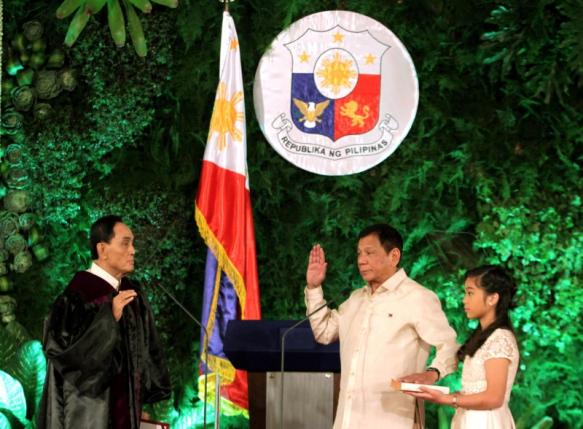 President Rodrigo Duterte takes his oath before Supreme Court Justice Bienvenido Reyes as his daughter Veronica holds the bible, during his inauguration as President of the Philippines at the Malacanang Palace in Manila, Philippines June 30, 2016. Presidential Palace/Handout via Reuters
Share:

Rodrigo Duterte was sworn in as the Philippines’ 16th president on Thursday, capping an unlikely journey for a provincial city mayor whose brash man-of-the-people style and pledges to crush crime swamped establishment rivals in May’s election.

After making his pledge at the presidential palace in Manila, with one hand on the Bible, Duterte delivered a short speech in which he promised a “relentless” and “sustained” fight against corruption, criminality and illegal drugs.

However, he said these ills were only symptoms of a virulent social disease cutting into the moral fiber of society.

Duterte said on Thursday that he would give specifics of his economic policies later, but some already fear that his defiance of convention could pose a danger to the country’s health.

In the election campaign, Duterte railed against the country’s political elite and tapped into voters’ disgust with a succession of governments that failed to tackle poverty and inequality even when the economy was bounding ahead.

His campaign focused almost entirely on the scourges of murder, rape, drug abuse and corruption, and voters were not deterred by his repeated warnings, in profanity-peppered speeches, to have offenders killed.

“VERGING ON THE ILLEGAL”

Duterte conceded in his maiden speech that many critics believe his methods of fighting crime “are unorthodox and verge on the illegal”. However, the 71-year-old former prosecutor said that he knew right from wrong and would be uncompromising in adhering to due process and the rule of law.

Duterte was mayor for 22 years of the far-south city of Davao, where, according to human rights groups, death squads have killed at least 1,400 people since 1998, most of them drug-pushers, addicts, petty criminals and street children.

He denies any involvement in the vigilante killings.

In keeping with his unsophisticated manner, the inauguration ceremony was far less elaborate than those of his predecessors.

Aides said there would be no sumptuous banquet and no champagne corks popping, just a meal of homely dishes for the roughly 600 guests showcasing the country’s culinary heritage, including coconut pith spring rolls, a white cheese made from unskimmed carabao milk and durian tartlets.

Duterte is not known for his sartorial elegance: he usually sports a short-sleeved casual shirt, never wears socks and told Reuters on the campaign trail that he wouldn’t be seen in a tie.

For his inauguration, Duterte wore a formal ‘barong’ shirt but without the embroidery that would normally be expected for such an occasion. State TV presenters commented that he appeared to be wearing slip-on loafers.

Indeed, there is little about him that is conventionally presidential.

Aides say that instead of being driven around in the president’s limousine, a bullet-proof Mercedes, Duterte wants to travel in a pick-up truck.

It is still not clear if he will keep a promise to spurn the luxury of the palace and commute daily from his hometown in the south of the country, which is two hours from Manila by air.

A 21-gun salute welcomed in the new president at Malacanang Palace, a graceful white mansion that was originally built by Spanish colonialists in the 18th century and became the official residence of the president after World War Two.

ECHOES OF AN AUTHORITARIAN PAST

Very few media organizations were invited to the inauguration ceremony, the upshot of a furor Duterte unleashed recently when he suggested that corrupt journalists were legitimate targets for assassination.

Duterte’s incendiary rhetoric and advocacy of extrajudicial killings to stamp out crime and drugs have alarmed many who hear echoes of the country’s authoritarian past.

In the few weeks since his landslide election victory there has been a jump in the number of suspected drug dealers shot dead by police and anonymous vigilantes across the country, a sign, critics say, that a spiral of violence has already begun.

“Duterte tapped into a raw nerve in Philippines society about crimes being committed and no one being held responsible,” said Chito Gascon, head of the Commission on Human Rights. “Now you have this momentum for action but the cure could be worse than the disease.”

As well as taming crime, voters will be looking to Duterte to fix the country’s infrastructure, create jobs and lift more than a quarter of the 100 million population out of poverty.

But he has also said he will continue Aquino’s economic policies, which focused on infrastructure and fiscal efficiency, to push growth up to 7-8 percent, and analysts say they are encouraged that he plans to delegate this to experienced hands.