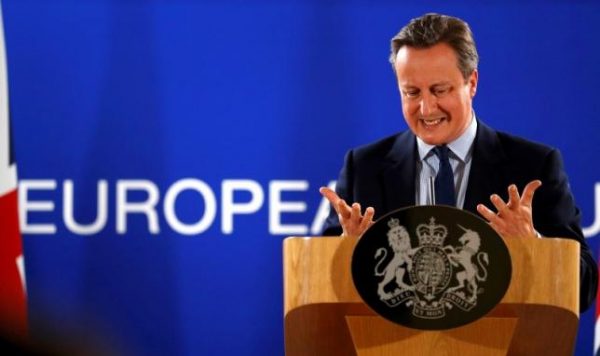 European leaders told Britain on Tuesday to act quickly to resolve the political and economic confusion unleashed by its vote to leave the European Union last week, after the IMF said the uncertainty could put pressure on global economic growth.

Sterling and world stock markets recovered slightly on Tuesday but investor confidence remains fragile despite policymakers saying they will take all necessary measures to protect their economies.

Last week’s referendum wiped a record $3 trillion off the value of global shares and sterling fell to its lowest level in 31 years against the U.S. dollar.

British Finance Minister George Osborne, whose attempt to calm markets on Monday went unheard, said on Tuesday the government would have to cut spending and raise taxes to stabilize the economy after credit rating agency Fitch became the third agency to downgrade UK debt.

Businesses have announced hiring freezes and possible job cuts, despite voters’ hopes the economy would thrive outside the EU.

Germany’s financial market regulator delivered a double blow to the City of London, saying it could not host the headquarters of a planned European stock exchange after Britain leaves the EU and could not remain a center for trading in euros.

European countries are concerned about the impact of the political and regulatory uncertainty on the economies of the other 27 other EU members while the UK government works out how and when to begin withdrawal negotiations under Article 50 of the Lisbon Treaty.

Draghi had added that he agreed with private economists who predict euro zone growth will be reduced by up to 0.5 percent cumulatively over the next three years due to the “Brexit” vote.

At a summit meeting of the leaders of the EU in Brussels on Tuesday, Cameron said he hoped the UK would maintain as tight an economic and political relationship as possible with the EU.

“Britain will be leaving the European Union but we will not be turning our back on Europe,” he told a news conference after a dinner at which he said many European partners expressed regret and voiced friendship for Britain.

In a veiled rebuke to UK “Leave” campaign leaders such as Boris Johnson, who is vying to succeed him, Cameron said Britons would have to understand they could not keep all the benefits of EU membership without the costs.

“If they don’t want free movement, they won’t have access to the single market,” he said, adding that the City of London would no longer be able to act as a clearing house in euros.

The European Parliament adopted a non-binding resolution on Tuesday demanding that London activate the EU treaty’s voluntary exit clause as fast as possible and launch negotiations on withdrawal terms with a two-year countdown to departure.

But German Chancellor Angela Merkel said London should be allowed time to recover its balance after the political shockwave before formally notifying its partners of its plans.

The other 27 EU leaders will hold their own meeting on Wednesday to discuss how to deal with Britain on its way out of the bloc it joined in 1973, and how to take the Union forward without it.

Policymakers and companies around the world are scrambling to assess the impact Brexit will have.

Federal Reserve governor Jerome Powell said the decision had shifted global risks “to the downside”, while Japanese Prime Minister Shinzo Abe urged the Bank of Japan to provide ample funds to the market to keep the wheels of economy turning.

“A sense of uncertainty and worry about risks remain in the markets,” Abe said.

Back in London, Conservative Party officials said on Tuesday that Cameron’s successor as prime minister would be appointed at the earliest on Sept. 9.

Cameron, who called the referendum and tendered his resignation as prime minister when it became clear he had failed to persuade Britain to stay in the EU, says he will let his successor declare the country’s exit formally.

Meanwhile, UK Labour Party lawmakers passed a vote of no-confidence in leader Jeremy Corbyn on Tuesday, accusing him of failing to win over traditional supporters during the referendum campaign. The lawmakers fear a similar failure at the next general election, due in 2020, will lead to Labour suffering a major loss of seats in parliament.

However, the Labour confidence vote does not automatically trigger a leadership election and Corbyn refused to quit. “I was democratically elected leader of our party for a new kind of politics by 60 percent of Labour members and supporters, and I will not betray them by resigning,” he said.

Underlining the political upheaval that the Brexit vote set in motion, Scottish First Minister Nicola Sturgeon is to visit Brussels on Wednesday for talks with the president of the European Parliament and European Commission officials.

Sturgeon has said Scotland, where nearly two in three voters backed staying in the EU, does not want to leave the bloc and may hold a new referendum on independence.