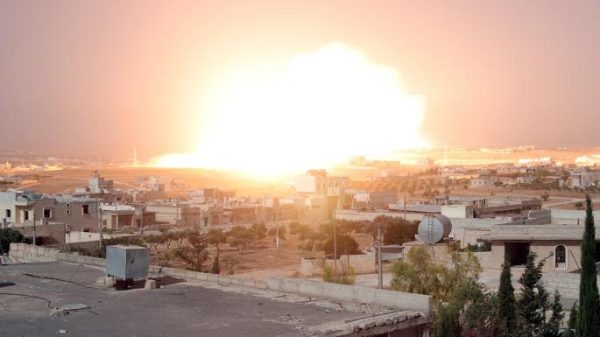 Russian forces are believed to have used thermite, which burns at 2,200C, to bomb residential areas of Aleppo MUSTAFA SULTAN/ANADOLU AGENCY/GETTY IMAGES
Share:

Russia is breaching international conventions by dropping incendiaries similar to white phosphorus on to residential neighbourhoods in the Syrian city of Aleppo in what is thought to be the prelude to a ground assault to retake the city from rebel forces.

Photographs have also shown what experts believe to be a thermobaric bomb, the most powerful explosive apart from a nuclear weapon, being detonated next to urban areas, with potentially devastating effects for civilians.

Video footage has emerged showing the glowing showers of what is thought to be thermite raining down on a rebel-held suburb of Aleppo and starting huge fires.

Hussein Mohammad, the cameraman who shot the footage, said six Russian planes started circling the city about midnight on Monday (7am Tuesday, AEST). Two of them dropped a “phosphorus-like substance” that took search-and-rescue crews an unusually long time to put out. One person was killed and about 25 injured.

Thermite bombs are incendiary weapons that burn at extremely high temperatures and are difficult to extinguish. Like phosphorus, thermite causes severe and often fatal burns.

“I’d say thermite is worse than white phosphorus as it’s extremely difficult to put out,” said Eliot Higgins, founder of Bellingcat, an investigative journalism website, who identified the weapons.

“We have seen these munitions used before in the conflict, since late 2012. But the interesting aspect (in these recent attacks) is that Russia appears to be the one dropping them.”

Moscow is also dropping what appear to be fuel-air bombs, ­described by one arms expert as “a mini nuclear bomb” next to residential areas.

Thermobaric weapons generate a high-temperature explosion followed by a blast wave that lasts far longer than a conventional explosive. “It is a breach of the Geneva Convention to use these weapons off the battlefield,” Major Hunter said. “The effect on civilians is horrific.”

While thermite and white phosphorus are not completely banned under the Convention on Certain Conventional Weapons, they are not permitted to be used as an ­offensive weapon in civilian areas.

“The Russian warplanes started to use (these weapons) about a month ago,” said Mohammed al-Ash, an opposition activist in Aleppo. “It’s really terrifying; night turns into clear day. It’s like huge fireworks in a festival. My city is totally stricken. There are hundreds of airstrikes with vacuum rockets, thermite and cluster bombs, barrel bombs and naval mines.”

Thermite is only the latest banned or restricted weapon to be deployed by the Kremlin in Syria. There have also been reports of cluster munitions — bombs that break up in the air into smaller incendiaries that can cause death and injury over a wide area — since Russia entered the conflict on President Bashar al-Assad’s side last September.

Aleppo has been torn between regime and rebel forces for almost four years. Assad’s army and its ­allies are gearing up for a major ­offensive to retake the rebel-controlled suburbs, which would deal a major blow to the opposition. General Ali Abdullah Ayyoub, Assad’s chief of general staff, ­visited the frontlines near Aleppo on Monday to inspect the troops’ preparations.

At least 250,000 people have been killed across Syria during the five-year conflict, with some monitoring groups claiming the death toll may be double that.

UN investigators yesterday ­announced that more than 700 doctors and medical workers had been killed during the conflict, many of them in airstrikes.

“As civilian casualties mount, the number of medical facilities and staff decreases, limiting access to medical care even further,” Paulo Pinheiro, head of a commission of inquiry into the Syrian conflict, told the UN Human Rights Council. “With each attack, terrorised survivors are left more vulnerable. Schools, hospitals, mosques, water stations … are all turned into rubble.”