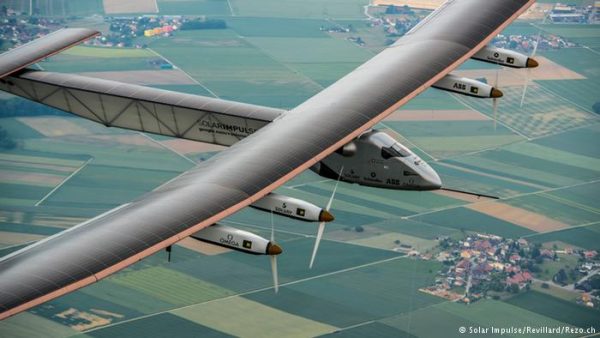 The Solar Impulse 2 landed in Spain Thursday after completing a 71-hour flight from New York in the first “magical” solo transatlantic crossing in a solar-powered airplane.

Applause broke out as the experimental plane set down at Seville airport in southern Spain just before 7:40 am (0540 GMT) where a team was on the ground to welcome Swiss pilot and adventurer Bertrand Piccard.

“It is so fantastic!” Piccard told the plane’s mission control centre in Monaco in remarks broadcast online as the plane, which took off from New York on Monday, touched down.

Exhilarated, the 58-year-old told AFP he had thought a lot about aviation pioneer Charles Lindbergh, the first man to fly solo across the Atlantic, during the 6,765-kilometre (4,200-mile) flight.

“I met him when I was 11, we were both at the Apollo 12 take-off, and for me Lindbergh is one of these heroes who did what no one thought was possible,” he said by phone.

With the success of this challenging crossing, Solar Impulse has completed the 15th leg of a round-the-world trip aimed at promoting clean, renewable energy.

It set out on March 9, 2015 in Abu Dhabi, and has flown across Asia and the Pacific to the United States with the sun as its only source of power — able to fly through the night by energy stored in its 17,000 photovoltaic cells.

The voyage marks the first solo transatlantic crossing powered only by sunlight — a trip close to Piccard’s heart as he crossed that same ocean in 1999 on the first non-stop air balloon circumnavigation of the globe without fuel.

“Good morning Seville! Do you have a lot of direct flights from NYC?” he tweeted with a wink shortly before coming in to land, when he was treated to a surprise acrobatic display put on by the Spanish air force.

Piccard got little sleep during the near three-day journey, surviving on short catnaps.

He experienced what he described as “a long night of turbulence” but was also treated to sightings of whales and icebergs, and even spotted a commercial plane flying past him.

“I just tried to soak in this magical experience — when you fly without any noise or fuel, it’s magic,” he said.

Piccard said he had been guided by a group of engineers and meteorologists who had enabled him to face challenges and pass through clouds as if “through the eye of a needle.”

Solar Impulse is being flown on its 35,400-kilometre trip round the world in stages, with Piccard and his Swiss compatriot Andre Borschberg taking turns at the controls of the single-seat plane.

Borschberg piloted a 6,437-kilometre flight between Japan and Hawaii that lasted 118 hours, smashing the previous record for the longest uninterrupted journey in aviation history.

After the Atlantic crossing, Borschberg is due to fly to Egypt, and Piccard will make the final journey back to Abu Dhabi in early July.

No heavier than a car but with the wingspan of a Boeing 747, Solar Impulse typically travels at a mere 48 kilometres per hour (36 miles per hour), although its flight speed can double when exposed to full sunlight.

Borschberg and Piccard say they want to raise awareness of renewable energy sources and technologies with their project.

“When you fly in a plane like this, you have the impression of being in a science fiction story,” Piccard said.

“You look at the sun above you, and then you realise that the sun is providing the necessary energy to run the four electric engines and charge the batteries, spend the night flying and continue the next day.

“When you see what can be done with this clean energy, you think ‘why is it not used more everywhere’?”