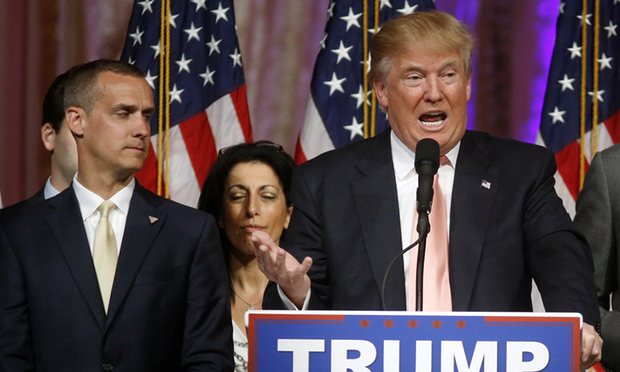 Trump spokeswoman Hope Hicks said Monday that “Lewandowski will no longer be working with the campaign.” She paid tribute to his “hard work and dedication” and wished him the best.

A hard-charging figure, and in some ways as unconventional as the candidate himself, Lewandowski had been by Trump’s side since the beginning of his unlikely rise to presumptive GOP nominee.

The move came as Trump faces continued deep resistance from many quarters of his party concerned by his contentious statements.

Lewandowski has long been a controversial figure in Trump’s campaign, but benefited from his proximity to the presumptive Republican nominee. He traveled with Trump on his private plane to nearly every campaign stop, giving him more direct access to the businessman than nearly any other campaign staffer.

He was a chief promoter of the idea that the best campaign strategy was to “Let Trump be Trump.” He frequently dismissed the notion that Trump needed to hire more experienced political hands, spent on polling and sophisticated data operations, or moderate his rhetoric as he moved toward the general election.

The statement released by Hicks said in full: “The Donald J. Trump Campaign for President, which has set a historic record in the Republican Primary having received almost 14 million votes, has today announced that Corey Lewandowski will no longer be working with the campaign. The campaign is grateful to Corey for his hard work and dedication and we wish him the best in the future.”