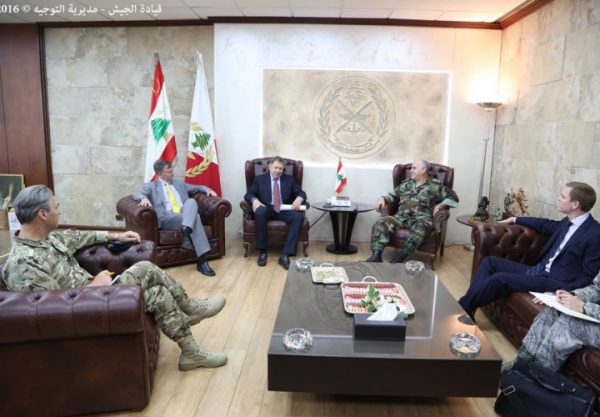 The Lebanese Army was able through exceptional measures, to prevent militants from entering Lebanon and preserve the country’s stability, Army commander Gen. Jean Kahwagi said Wednesday, stressing that the army ranked among the world’s best and its soldiers have proven that they have the courage, competence, and readiness for sacrifice .

He revealed however that the only thing the army lacks  is quality equipment and arms  that would allow it to work with maximum effectiveness.”

“In all the battles that the Army carried out against this enemy, our soldiers have proven that they have the courage, competence, and readiness for sacrifice,” he said and the only thing they’re missing is the quality of equipment and weapons that would allow them to work with maximum effectiveness.”

Kahwagi was speaking during a meeting he chaired for the Higher Supervising Committee of the U.S. and British aid program to protect the territories. Both interim U.S. Ambassador to Lebanon Richard Jones and the U.K.’s Ambassador designate Hugo Shorter attended the meeting.

Kahwagi thanked the American and British authorities for their constant support for the Army, saying that this directly improved the military’s readiness to fight.

Jones and Shorter praised the Lebanese Army and its achievements, vowing that their countries would continue to offer support for the Army.