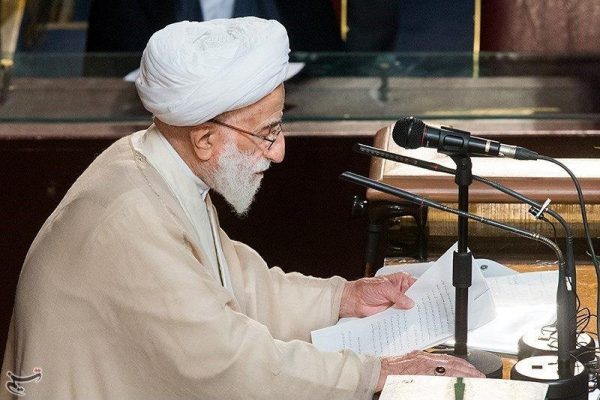 Ahmad Jannati, the head of Iran’s new Assembly of Experts, speaks during the Assembly meeting in Tehran, Iran on May 24. TASNIM NEWS AGENCY/REUTERS
Share:

When the nuclear agreement with Iran was signed last year, one of the arguments for it was that it would help “moderates” in Tehran. And when Iran held parliamentary elections and elections for the clerical Assembly of Experts in February, many analyses said the “moderates” had won.

NPR said, “Moderates Win a Majority of Seats in Iran’s Clerical Assembly,” adding that “Iran’s moderates have dealt another blow to the country’s hard-liners.”

Fox News said, “Iranian reformists and relative moderates who support last year’s nuclear deal won the most seats in parliament and a clerical body charged with selecting the next supreme leader in a major setback for hard-liners.”

Some analysts disagreed, as I noted in this blog post. In fact, the idea of a “moderate” victory was a fiction, and now we have even more proof. Here is Reuters:
A powerful anti-Western cleric was chosen on Tuesday as the head of Iran’s new Assembly of Experts, in a sign that hardliners are still in firm control of the body in charge of choosing the next supreme leader. Ahmad Jannati, 90, is an outspoken critic of President Hassan Rouhani and his attempts to end Iran’s global isolation by normalizing ties with the West.…

Jannati is also the chairman of the Guardian Council, a hardline vetting body that disqualified the majority of prominent reformist and many moderate candidates from running in the February elections.

Even by the standards of Iran’s clerical establishment, Jannati stands out for his virulently anti-Western opinions, once accusing the West of having created al Qaeda and describing U.S. forces in Iraq as “bloodthirsty wolves.”

An apparently surprised BBC said this:

Ayatollah Ahmad Jannati, 90, was one of the few hardliners to secure re-election to the assembly in February.

Reformists and moderates asked their supporters to vote tactically to stop most of them retaining their seats.

But Ayatollah Jannati’s election is a signal that hardliners are still in control of the assembly.

Quite so. In other words, the notion that “moderates” had won a great victory in February has now been even more conclusively disproved. The “Assembly of Experts” where hardliners supposedly were defeated has now elected just about the hardest-liner of them all as its head.

Just who is Jannati? Here’s what Time magazine had to say about him a few years ago, when Mahmoud Ahmadinejad was Iran’s hardliner president:

While much of the senior clergy is skeptical of Ahmadinejad, 83-year-old Jannati is the President’s key ideological and spiritual ally. Viewed as the most radical of Iran’s senior clerics, he heads the 12-member Guardian Council that oversees elections. The Council has been asked by Ayatullah Khamenei to review opposition complaints over the election.

Virulently opposed to Israel and the U.S., Jannati has repeatedly used his authority in the Guardian Council to disqualify Iranian reformists seeking the presidency or a seat in parliament, arguing that the “first and foremost” requirement for any candidate for elected office in Iran is unwavering fealty to the absolute rule of the Supreme Leader.

Jannati is also the founder of a religious school in Qom that emphasizes belief in the Mehdi, or Hidden Imam, who tradition says will reappear amid global chaos to spread Islam throughout the world. Others among the senior clergy are leery of promoting such millenarian beliefs.

Add it all up. The nuclear deal did not bring any moderation whatsoever to Iran’s internal or external conduct. The notion that “moderates” won the February elections is a fantasy. And the Assembly of Experts just chose the “most radical of Iran’s senior clerics” to lead it and lead the choice of the next supreme leader.

Let’s hear no more nonsense about “moderation” in Iran.