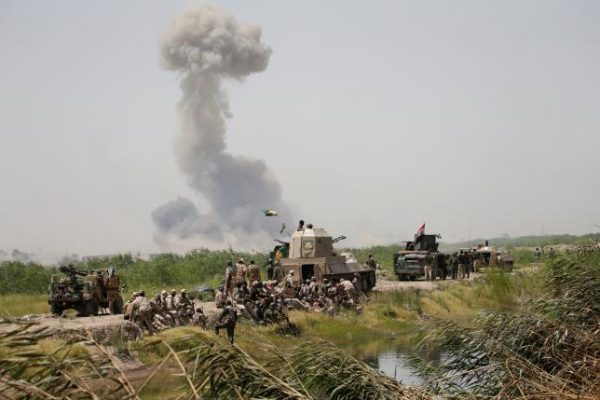 U.S.-led coalition strikes supporting Iraqi forces in the recapture of Falluja have killed 70 Islamic State militants including the group’s commander in the city, a U.S military spokesman said on Friday.

U.S. Army Colonel Steve Warren, a spokesman for the U.S.-led military campaign against Islamic State, said the coalition had carried out 20 strikes in support of the campaign over the past four days.

Maher al-Bilawi, commander of Islamic State fighters in Falluja, was killed two days ago, Warren said. He said the killing of Bilawi and the other militants “won’t completely cause the enemy to stop fighting but it’s a blow.”

The final battle to recapture the Islamic State stronghold near Baghdad will start in “days, not weeks”, a Shi’ite militia leader said on Friday, as new reports emerged of people starving to death in the besieged Sunni city.

The first phase of the offensive that started on Monday is nearly finished, with the complete encirclement of the city that lies 50 km (32 miles) west of the Iraqi capital, said Hadi al-Amiri, leader of the Iranian-backed Badr Organization.

Wearing military fatigues, Amiri spoke to state-TV from the operations area with Prime Minister Haider al-Abadi standing by his side in the black uniform of Iraq’s counter-terrorism force.

At the end of last year, Abadi said 2016 would be the year of the final victory over Islamic State, which declared a caliphate two years ago in territory it controls in Iraq and Syria.

Falluja is a bastion of the insurgency that fought the U.S. occupation of Iraq and the Shi’ite-led authorities that replaced Iraqi leader Saddam Hussein, a Sunni. It was the first city captured by Islamic State in Iraq, in January 2014, and is the second-largest still held by the militants after Mosul, their de-facto capital.

Amiri said this week the Shi’ite paramilitary coalition known as Popular Mobilization would only take part in the encirclement operations, and would let the army storm Falluja. It would only enter the city if the army’s attack failed.

The army has defused more than 250 explosive devices planted by the militants in roads and villages to delay the troops’ advance, state TV said, citing military officers.

Amiri called on civilians to leave from a southwestern exit called al-Salam (Peace) Junction. But the United Nations said on Friday about 50,000 civilians were being prevented by the hardline Sunni militants from escaping.

Those who did manage to flee the city reported some people were dying of starvation, the U.N. refugee agency UNHCR said. The Norwegian Refugee Council on Thursday reported similar accounts from displaced people interviewed at a camp near Falluja.

“Food has been in very short supply. We are hearing accounts that people are relying on expired rice and dried dates and that’s about it for their diet,” UNHCR spokeswoman Melissa Fleming told a news briefing in Geneva.

“They have to rely on unsafe water sources, including drainage water from the irrigation canals.”

Another UNHCR spokeswoman, Ariane Rummery, later said about 825 families were able to leave the city hurriedly on Friday, with no belongings, and were taken to safety by minibus.

Between 500 and 700 IS militants are in Falluja, according to a U.S. military estimate. The death toll since the start of the military operation on Monday has reached about 50, including 30 civilians and 20 militants, a source in the city’s main hospital said.

Success in recapturing Falluja might help Abadi refocus the attention of Iraq’s unruly political parties on the war on Islamic State, and defuse unrest prompted by delays in his planned reshuffle of the cabinet to help root out corruption.

But thousands of anti-corruption demonstrators gathered again on Friday in central Baghdad, prompting security forces to fire tear gas and rubber bullets as they tried to approach the heavily fortified Green Zone.

The demonstrators ignored Abadi’s appeal on Thursday for an end to protests against his government while the armed forces are fighting to retake Falluja. “Holding demonstrations is a right, but that would put pressure on our forces,” he said

A week ago, security forces fired live rounds at demonstrators who broke into the Green Zone, killing four and wounding more than 90, according to hospital sources.