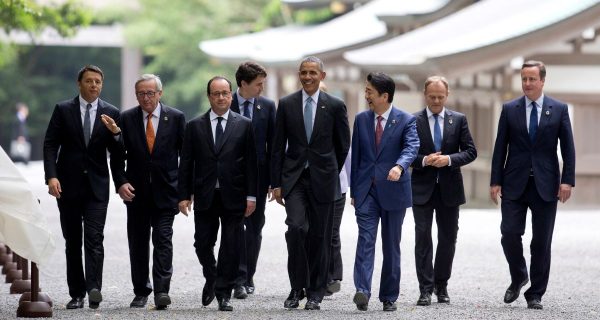 “They’re rattled by him and for good reason,” Obama said. “Because a lot of the proposals that he’s made display either ignorance of world affairs or a cavalier attitude or an interest in getting tweets and headlines instead of actually thinking through what is required to keep America safe.”
“They are surprised by (Trump), not sure how to take some of his pronouncements,” the President added.
Obama said the world is watching the campaign.

“The world pays attention to U.S. elections,” Obama said. “They pay more attention to our elections sometimes than we pay to theirs. The U.S. is … at the heart of the international order and even those countries that are critical of us…know that ultimately things don’t hold together so well if the U.S. isn’t making good decisions and they count on us to provide stability when making global decisions.”

Asked about the continued divisiveness on display on the Democratic side of the 2016 race, Obama said people get “grumpy” during the primaries, including his own back in 2008, but will ultimately come together and argued that Hillary Clinton and Bernie Sanders largely agree on the policy front, but differ on tactics.

The President said that and that it’s important to finish the Democratic primary contest in a way that doesn’t leave anyone with ruffled feathers.

“I would urge and have urged, both sides to stick to the issues,” Obama said. “They’re both good people, I know them both well, and I think its’ important to try to end this in a way that leaves both sides feeling proud of what they’ve done.”

He added, “I guarantee you that the eventual nominee sure wishes it were over now. It’s a grind, it’s hard.”
The president said he wanted the Democratic primary to “play out, let voters make up their minds.”

Obama also largely deflected questions about Clinton’s use of a private email server, saying he’s addressed the topic previously and the questions would be better put to the campaign.

Thursday morning saw the leaders of Japan, the U.S., UK, Italy, Germany, France, Italy and Canada gather in the grounds of the Ise-Jingu shrine, a 2,000-year-old temple in central Japan.

Obama also said he is going to Hiroshima Friday to underscore the “very real risks” of nuclear weapons and the “urgency that we all should have,” he said.

He will become the first U.S. President to visit the Japanese city where the first atomic bomb was dropped.
Obama told reporters that the dropping of the bomb was an “inflection point in modern history” and is something “all of us have had to deal with in one war or another.”

He added that the “backdrop of a nuclear event remains something that, I think, presses on the back of our imaginations.”

Obama also remarked on importance of reducing nuclear weapons and the progress made in that arena, citing the Iran deal.

“Obviously ISIL using rifles, crude bombs, could kill a lot of people in a Paris or a Brussels and people are rightly insisting the world community stamp out ISIL and there is a reason why were focused on that,” he said, using another acronym for the terror group.

But, he added: “We can’t focus on the short term … when you have a regime (in North Korea) that is so isolated and flouts international rules, devotes national resources hell bent on getting nuclear weapons.”
Obama said the G-7 meetings so far had been “extremely productive.”

“For us to (be able to) get together and focus on critical issues … is vitally important,” he said.

He said the meetings had focused on trade and issues facing the global economy, and how the group could work to accelerate growth and “put people back to work,” and the importance of stepping back from protectionist policies that leave countries collectively weaker.
CNN