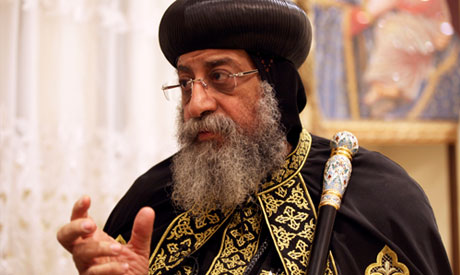 The Coptic pope has called for restraint following inter-religious violence in a village in Egypt.

The tension erupted after rumours of a love affair between a Christian man and a Muslim woman in Minya province.

Houses were set on fire and the man’s mother was stripped of her clothing and paraded through the streets.

The Coptic Orthodox Church said authorities have assured them they would “chase down the perpetrators and bring them to justice”.

The attacks happened in Karam village in the central province on Minya on 20 May.

Details emerged late on Wednesday in a statement from the Coptic Church, which said Pope Tawadros II was calling for Copts to show “self-restraint”.

The Church said that after the Christian man had fled the village, his mother was beaten, insulted, stripped of her clothes and paraded through the streets by a group of people.

Egyptian media (in Arabic) said there were up to 300 people involved.

Muslims torched six or seven Christian homes in the village on the same day.

Christian men cannot marry Muslim women in Egypt without converting to Islam first. Sexual relations between people who are not married to each other are taboo among both Muslims and Christians there.

Copts make up about a 10th of the country’s population of 90 million people.

Copts claim they face discrimination and play a lesser part in Egyptian public life than their numbers justify.

There have also been violent attacks on Copts and their churches by Islamists.