Islamic State ‘destroyed helicopters’ at Russian base in Syria 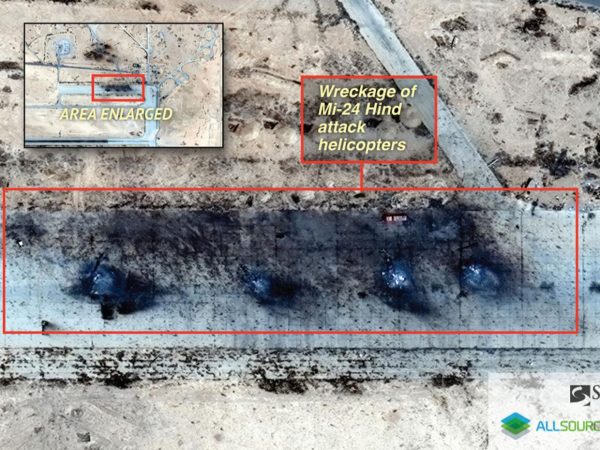 New satellite imagery appears to reveal extensive damage to a strategically significant airbase in central Syria used by Russian forces after a reported attack by so-called Islamic State (IS).

Four helicopters and 20 lorries were destroyed in a series of fires inside the T4 base last week, the images from intelligence company Stratfor suggest.

The cause of the fires is unconfirmed.

The Russian military has denied reports that it had lost helicopters at the base as a result of an IS attack.

A news agency linked to IS, Amaq, was the first to report the incident, without saying what had caused the fires, says BBC Arabic Syria correspondent Rami Ruhayem.

“Burning of four Russian attack helicopters and 20 trucks loaded with missiles inside T4 airport in eastern Homs [province] as a result of a nearby fire,” it said in an urgent report, leading to speculation that it could have been accidental.

On the same day, IS released an image it said showed one of its fighters firing Grad rockets at T4, also known as Tiyas.

“What the imagery tells us is that first of all this was not an accidental explosion, as some of the rumours kept saying,” Stratfor military analyst Sim Tack said.

“It shows very clearly that there are several different sources of explosions across the airport, and it shows that the Russians took a quite a bad hit.

“An entire combat helicopter unit was wiped out – four helicopters in total – as well as some damage to some of the Syrian planes on the airport, and also very notably a logistic depot, likely one that was being used to supply those specific combat helicopters.”

Mr Tack described Amaq’s account as “very accurate”, and suggested the helicopters and depot were destroyed by IS attacks.

He said it was unclear why IS had not officially said it had caused the destruction.

“In the past IS has claimed similar attacks, they have even videotaped the attacks themselves.

“In this case, we haven’t seen any of those materials come out yet. One possibility is that by making the statement they were intending to claim it while not necessarily phrasing it that way.”

Russian ministry of defence spokesman Igor Konashenkov insisted that “all Russian combat helicopters in Syrian Arab Republic continue their mission to destroy terrorists. There are no losses among the personnel”.

He said the base had been damaged as a result of fighting between IS militants and Syrian army months before Russian military deployment there.

The area where the airbase is located is strategically significant, Rami Ruhayem says.

The province of Homs stretches out into the Syrian desert towards Raqqa, the capital of the “caliphate” proclaimed by IS in 2014, and Deir al-Zour, on the way to the border with Iraq, he notes.

As it tries to shake the government’s grip on Homs, IS is facing a diverse range of factions on the ground.

A Kurdish-Arab alliance has announced the launch of a military campaignagainst IS north of Raqaa.

“With the participation of all SDF [Syrian Democratic Forces] units, we start this operation to liberate northern Raqaa” province, the SDF said on Twitter, quoting Kurdish commander Rojda Felat.

The assault will be supported by air strikes from the US-led coalition bombing IS in Iraq and Syria, it added.

The Iranian Al-Alam news website carried reports earlier this month that “Syrian allied forces” had cut off IS supply lines between Raqqa and Homs by taking over four hills overlooking the Shaer gas fields held by IS.

But Mr Tack counters that IS supply lines to Raqqa are holding.

“The regime and the Russians are facing notable challenges in trying to disconnect those two.

“Right now though, the emphasis seems to be more on moving towards Deir al-Zour rather than messing with Raqqa.”