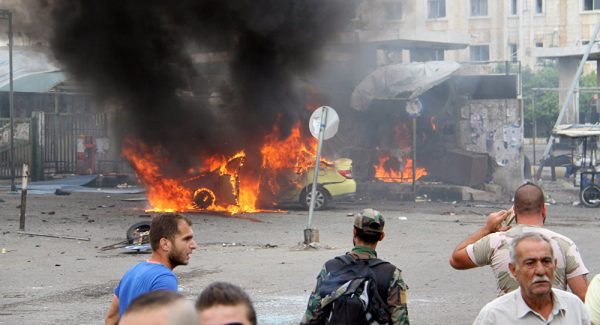 A Syrian army soldier and civilians inspect the damage after explosions hit the Syrian city of Tartus in late May 2016Reuters
Share:
A series of coordinated explosions including suicide bombings rocked two normally quiet coastal government strongholds in Syria Monday, killing more than 100 people and wounding 200 others, state media and opposition activists said. The Islamic State group claimed responsibility for the attacks.

The morning blasts in pro-government cities of Tartus and Jableh were the first of their kind targeting civilians in those areas in the course of Syria’s civil war, now in its sixth year. The targets included bus stations, a gas station and a hospital, marking a sharp an escalation in the conflict as world powers struggle to restart peace talks in Geneva.

Several rounds of talks were held in the Swiss city earlier this year, although there was no breakthrough and the talks never really took off.

Russia, which is heavily invested in the Syrian war on behalf of President Bashar Assad’s government, keeps a naval base in Tartus and an air base in Latakia province, about five kilometers (three miles) north of Jableh. Insurgents fighting to topple Assad maintain a presence in rural Latakia.

Jableh News Network, an opposition activist media group, said that one of those killed at the hospital is a nurse, Huda al-Houshi.

Shortly afterward, TV reports and residents said suicide bombers followed by a car-laden with explosives tore through a packed bus station and petrol station in Tartus, minutes apart. More than 33 were killed and many injured in the bombings.

The explosions caused panic and took people by surprise.

A resident said she heard the first explosion followed by the wail of ambulance sirens rushing to the scene. Ninth graders were taking their exams Monday and had just finished at 9.30 am local time, around the same time of the explosion, and the bus stop would have been crowded, she said. The attackers also targeted a nearby gas station, where more than 100 cars are usually lined up to get petrol at this hour of the day, she said.

She spoke on condition of anonymity, citing security concerns.

Footage aired by the state-run Ikhbariya TV showed several cars on fire and thick black smoke billowing in the air. It also showed the charred remains of cars and minivans in what appears to be a bus station in Jableh.

Russian President Vladimir Putin’s spokesman said the increase in militant attacks and bombings in Syria “once again demonstrates how fragile the situation in Syria is.”

Speaking Monday to journalists in Moscow, Dmitry Peskov said the situation “demonstrates the need to continue vigorous steps to continue the negotiation process.”

Asked whether Russia would reconsider its decision to scale back the size of its military contingent in Syria, the spokesman pointed to Putin’s statement that Russia’s bases in Syria allow for “a very flexible approach” to the number of its troops deployed in Syria.

The Syrian Observatory for Human Rights, an opposition monitoring group based in Britain, put the death toll at more than 100.

The coordinated and near-simultaneous attacks marked a major security breach of government strongholds that have remained calm throughout the war. Tartus and Jableh are home to thousands of internally displaced people from violence-stricken areas across Syria.

The bombings unleashed an immediate backlash against the refugees, with families of the victims attacking IDP shelters. One shelter, al-Karnak, was burned down.

“We will not be deterred … we will use everything we have to fight the terrorists,” said Syrian Cabinet Minister Omran al-Zoubi on Syrian TV.

A news agency linked with the Islamic State group said the group’s militants were behind the multiple attacks.

The one-sentence report by the IS-linked Aamaq news agency, which routinely carries the group’s news and claims, offered no details.