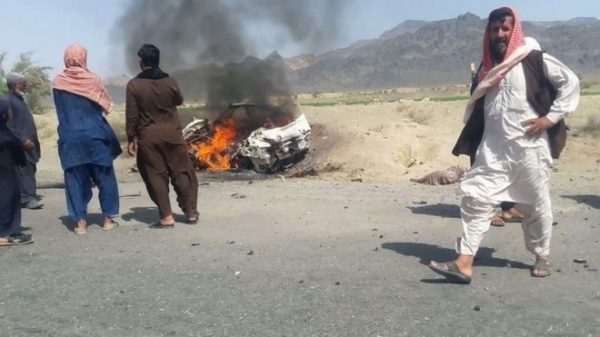 Afghanistan’s spy agency has confirmed that Taliban leader Mullah Akhtar Mansour has been killed, after the US targeted him in a drone strike.
Share:

Pakistan accused the United States on Sunday of violating its sovereignty with a drone strike against the leader of the Afghan Taliban, in perhaps the most high-profile U.S. incursion into Pakistani territory since the 2011 raid to kill Osama bin Laden.

Afghanistan said the attack killed Mullah Akhtar Mansour, which, if confirmed, could trigger a succession battle within an insurgency that has proved resilient despite a decade and a half of U.S. military deployments to Afghanistan.

Afghan guerrilla commander Sirajuddin Haqqani, a possible successor to Mansour, would likely prove an even more implacable foe of Afghan government forces and their U.S. allies.

Still, the Saturday drone strike, which U.S. officials said was authorized by President Barack Obama, showed the United States was prepared to go after the Taliban leadership in Pakistan, which the government in Kabul has repeatedly accused of sheltering the insurgents.

“This is a violation of Pakistan’s sovereignty,” Sharif told reporters in London.

A U.S. official, speaking on condition of anonymity, acknowledged that Washington only notified Pakistan after the strike.

It was unclear how long Mansour might have been inside Pakistan before the strike. Pakistan’s Foreign Ministry disclosed that a passport found at the site of the strike, bearing a different name, carried a valid Iranian visa.

It added that the purported passport holder was believed to have returned to Pakistan from Iran on Saturday, the day of the drone strike targeting Mansour. Photos of the passport, bearing the name Wali Muhammad, seen by Reuters showed a passing resemblance to some of the old photos available of Mansour.

If it is confirmed that Mansour had traveled to Iran before his death, it would raise new questions about the Taliban’s use of neighbouring territories, including Iran.

‘KILLED IN A DRONE STRIKE’

The United States stopped short of formally declaring Mansour dead, a day after announcing the strike.

“At this point, we’re not quite prepared to confirm that he was killed, though it appears likely,” U.S. Homeland Security Secretary Jeh Johnson told “Fox News Sunday.”

“Taliban leader Akhtar Mansour was killed in a drone strike … His car was attacked in Dahl Bandin,” Abdullah said in a post on Twitter, referring to a district in Pakistan’s Baluchistan province just over the border with Afghanistan.

The Taliban have made no official statement, but two Taliban sources said the Rahbari Shura, or leadership council, met on Sunday to begin considering the succession, a move that strongly suggested they accept that he is dead.

They considered Haqqani, seen by supporters as a strong leader who would defy the U.S. and Afghan governments, and Mullah Mohammad Yaqoob, the son of Taliban founder Mullah Mohammad Omar, a potential unifier because of his father’s name, as well as former Guantanamo detainee Mullah Abdul Qayyum Zakir and Mullah Sherin.

The meeting was expected to continue on Monday and naming a new leader could take days or weeks, the sources said.

“Based purely on matters of hierarchy, (Haqqani) would be the favorite to succeed Mansour,” said Michael Kugelman, a senior associate at the Woodrow Wilson Institute think tank.

The drone strike underscored the belief among U.S. commanders that the Taliban under Mansour’s leadership have grown increasing close to militant groups like al Qaeda, posing a direct threat to U.S. security.

U.S Secretary of State John Kerry said the United States had conducted a precision air strike that targeted Mansour “in a remote area of the Afghanistan-Pakistan border”.

Mansour posed a “continuing, imminent threat” to U.S. personnel and Afghans, Kerry told a news conference while on a visit to Myanmar.

“If people want to stand in the way of peace and continue to threaten and kill and blow people up, we have no recourse but to respond and I think we responded appropriately,” Kerry said.

Efforts to broker talks between the Afghan government and the Taliban had already stalled after a suicide attack in Kabul last month that killed 64 people and prompted President Ashraf Ghani to prioritize military operations over negotiations.

But Ghani’s office said on Sunday the removal of Mansour could open the door to talks and that Taliban members who wanted to end bloodshed should return from “alien soil” and join peace efforts.

Pakistan has in the past denounced U.S. strikes on its soil, calling them a violation of sovereignty, but U.S. officials have said Pakistan had approved some strikes, in particular on militants fighting the Pakistani state.

A Pakistani official in the area said a car had been blown up and two unidentified people had been killed. It was not clear how the vehicle was blown up and the two bodies had been taken to a hospital, said the official, who declined to be identified.

One of the Taliban commanders who dismissed the report of Mansour’s killing said it had nevertheless spread alarm.

“This rumor has created panic among our followers across Afghanistan and Pakistan,” the senior Taliban member said by phone, adding he was telling his comrades to ignore the report.

In December, Mansour was reported to have been wounded and possibly killed in a shootout at the house of an insurgent leader in Pakistan. The Taliban eventually released an audio recording, purportedly from Mansour, to dispel the reports.