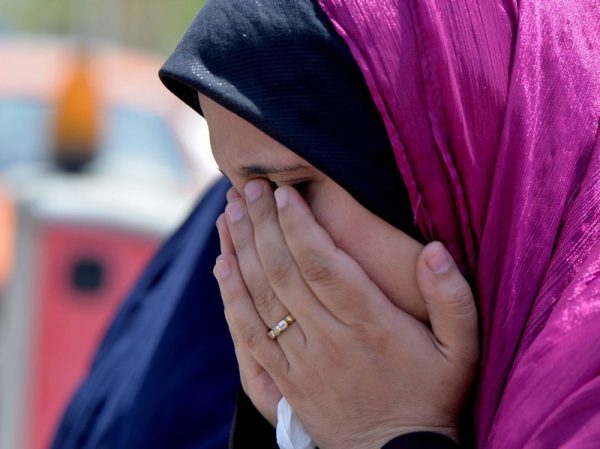 A relative of a passenger on EgyptAir Flight 804 cries at Cairo International Airport as she tries to get information about the plane’s fate. Anadolu Agency/Getty Images
Share:
The Egyptian military said in a statement Friday morning that it has found debris from EgyptAir Flight 804 in the Mediterranean Sea, off Egypt’s coastline.

The statement said that country’s navy had recovered some passenger belongings 180 miles from the port city of Alexandria and was searching for the rest of the wreckage.

“This time, Egypt says the items discovered are from the missing plane,” NPR’s Emily Harris reported from Cairo. “Late Thursday, other finds in the area turned out to be unrelated debris.”

Authorities are still looking for the aircraft’s flight data recorders — which could shed light on why the plane crashed, Emily says.

Flight 804 disappeared between Paris and Cairo early Thursday morning with 66 people on board.

At 7:48 p.m. ET (1:48 a.m. in Cairo), Greek air traffic controllers were in touch with the plane and no problems were reported. Greek aviation officials said that was the last Greek contact with the plane; a later attempt to talk to the crew was unsuccessful, the Two-Way reported Thursday.

According to the Egyptian civil aviation authorities, the flight was 37,000 feet over the Mediterranean at the time of its disappearance. It was traveling through Egyptian airspace, shortly after leaving Greek skies. The plane is presumed to have crashed in the sea. 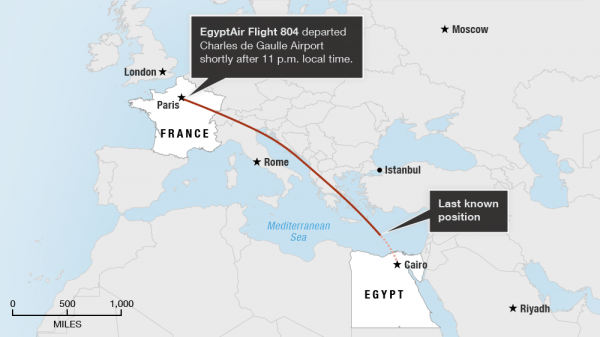 As the Two-Way reported, Egypt, Greece, France, England, Cyprus and Italy all worked to search for the plane after it disappeared from radar, according to Egypt’s military spokesman. A U.S. Navy patrol aircraft also joined the search, the Navy said.

Egyptian President Abdel-Fattah el-Sissi vowed that the search for the plane — and for answers — would continue. The statement from his office read, in part:

“The President gave directives to all relevant state authorities including the ministry of civil aviation and the armed forces’ search and rescue center, the navy and air force, to intensify search operations for the Egyptian aircraft and to take all measures necessary to locate the debris of the plane in collaboration and coordination with friendly countries.”
Egypt: Terrorist Attack More Likely Than Technical Failure

The plane swerved wildly before going off the radar, said Greek Defense Minister Panos Kammenos, according to the wire service. He said the plane “made a 90-degree left turn, then a full 360-degree turn to the right,” before plummeting out of the sky, The Associated Press reported. It added:

“Its erratic course suggested a number of possible explanations, including a catastrophic mechanical or structural failure, a bombing, or a struggle over the controls with a hijacker in the cockpit.”

Fathy confirmed that no distress signal had come from the plane, as the Two-Way reported.

Alexander Bortnikov, chief of Russia’s top domestic security agency, was quoted by the AP as saying: “In all likelihood it was a terror attack.”

However, no militant groups have claimed responsibility so far.

White House Press Secretary Josh Earnest said in a statement Thursday evening that the cause of the plane’s disappearance is still unknown.

“At this time we do not yet know definitively what caused the disappearance of Flight 804,” he said. “The United States stands ready to provide our full support and resources to the Governments of Egypt and France as they investigate this incident.”

Weather conditions were clear at the time of the plane’s disappearance, Reuters reported.

The 66 people aboard included three security personnel and seven crew members, EgyptAir said. The 56 passengers included one child and two infants. Of the passengers, 30 were Egyptian, 15 French and the remainder a variety of nationalities, the airline said. No Americans were said to be on board.

EgyptAir notified family members of passengers and crew, it said in a statement.

The families of the missing gathered at the Cairo airport, waiting for news of their loved ones, NPR’s Emily Harris reported.

“My Egyptian colleague here spoke to one woman very briefly this morning who was coming out of an EgyptAir office with no information, talking about her daughter and wiping away tears,” Emily told Morning Edition by phone from the airport.

Information about the people aboard the plane has been emerging. The New York Times reports:

“The passengers on the EgyptAir flight that plunged into the Mediterranean Sea on Thursday included a French rock ‘n’ roll photographer who considered skipping the flight; a Portuguese engineer and father of four; and a couple in their 40s from Angers, in western France, according to their families and local news reports.

“One of the Egyptian flight attendants was newly married. A young man from Chad, who was studying in France, was on his way to see his family after his mother’s death.”
The Los Angeles Times has begun compiling information about the people on Flight 804