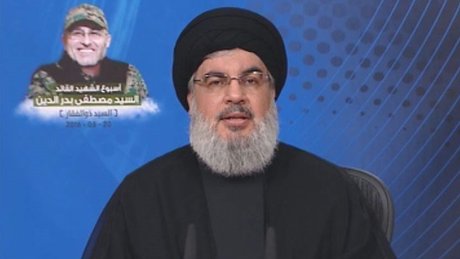 Lebanese Shi’ite group Hezbollah on Friday vowed to strengthen its presence in Syria and send a greater number of leaders than before, a week after its top military commander in the country was killed near Damascus.

“No death of any of our leaders will drive us from the battle. This precious blood will push us to a larger, stronger and more sophisticated presence,” Hezbollah  leader  Hassan Nasrallah said in a speech broadcast live on the group’s Al Manar television.

Hezbollah announced last  Saturday that  its top commander in Syria  Mustafa  Amine Badreddine was killed by “artillery bombardment carried out by takfiri groups.”

“We will continue the battle and we are confident that our efforts, blood and modest contributions, alongside all the other efforts, will lead to defeating the U.S.-Israeli-takfiri-Saudi scheme,” Nasrallah said in his speech.

Commenting on media reports that questioned Hezbollah’s statement about Badreddine’s death or suggested that he was killed by other parties, Nasrallah added: “Unfortunately, our malicious Israeli enemy was fair towards us but some Arabs were the ones who circulated rumors when they said that Hezbollah did not accuse Israel of killing Mustafa out of cowardice because that would have obliged it to retaliate.”

But Israeli reports did indicate that Badreddine was assassinated professionally using a smart bomb .

Israeli security agencies leaked a report that refutes the official statement issued by Hezbollah which claimed that its top commander  was killed by a shell fired by the takfiris. Israel military sources reported that Hezbollah did not tell the truth, and chose the easy way out. The sources emphasized that Badreddine’s assassination was carried out by a smart bomb, which is only possessed by a strong country in the region.

The military expert, known to be close to the sources of information Alex Fishman was quoted as saying:
“After floundering for three consecutive days, the Hezbollah leadership decided to resort to lying .After consultation with the Iranian Revolutionary Guard commanders, it decided to close the case of the assassination of Badreddine. It decided to give an answer that will satisfy its men in the Syrian battlefield and which will not require the party to respond and open up new fronts neither at at home nor abroad.

“To us, the file of the STL does not exist and we’re not concerned with anything it may request,” he said.

The STL had indicted Badreddine with being the head of the alleged Hezbollah squad that perpetrated the 2005 assassination of former PM Rafik Hariri. Badreddine and four other Hezbollah operatives are being tried in absentia over the murder.

Badreddine was the highest-ranking Hezbollah militant to be killed since the group joined Syria’s conflict four years ago.

Hezbollah and the Syrian army have a heavy presence around the Damascus airport, which includes a military base, and the area comes under regular shelling.

But Rami Abdul Rahman, who heads the Britain-based Syrian Observatory for Human Rights, said that according to his network of activists in the area, there had been no shelling in the airport area on the day that Badreddine was reportedly killed.

Hezbuollah has sent thousands of fighters to Syria to back President Bashar Assad’s regime against rebels and jihadists trying to remove him from power.