Venezuela food shortages cause some to hunt cats and dogs 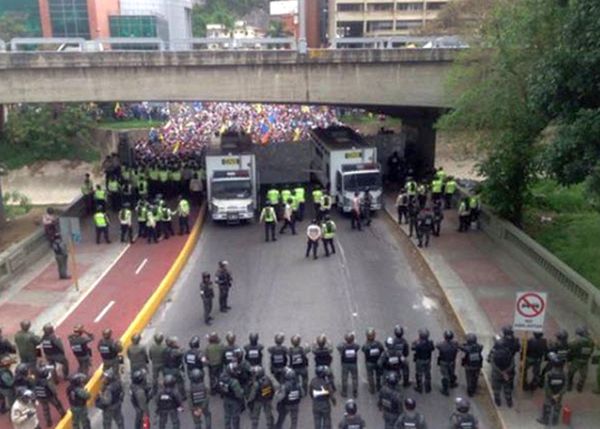 In what’s being called an “apocalypse,” Venezuela is experiencing an economic and social meltdown due to lack of food, medicine, water, electricity and money. People are reportedly hunting cats and dogs to obtain food.
Share:

Unemployed construction worker Roberto Sanchez could hear a time bomb ticking as he waited in line with 300 people outside a grocery store this week, hoping that corn meal or rice might be delivered later in the afternoon.

He fears that Venezuela could explode at any minute into political and economic chaos.

“We have no food. They are cutting power four hours a day. Crime is soaring. And (President Nicolás) Maduro blames everyone but himself for the mess we find ourselves in,” said Sanchez, 36. “We can’t go on like this forever. Something has to give.”

The question is what will give first. As the economy spirals into deeper disarray, protests aimed at driving the unpopular president out of office are growing. Maduro responded over the weekend by declaring a 60-day state of emergency to combat what he said are U.S.-sponsored efforts to overthrow his socialist government.

The confrontation has spilled into the streets. On Wednesday, riot police in Caracas fired tear gas as they clashed with thousands of protesters seeking a recall referendum against Maduro. The anti-government protest was the third in a week.

The unrest mounts as the country faces continuing shortages of essential food, medicine and toiletries. All the bakeries here in La Victoria, 55 miles southwest of Caracas, stopped producing bread last week because there is no flour.

“People are hunting dogs and cats in the streets, and pigeons in the plazas to eat,” Ramon Muchacho, mayor of the Caracas district of Chacao, said this month in a tweet that was reported in many newspapers.

Although Venezuela has the world’s largest petroleum reserves, the country has suffered from a combination of lower oil prices and tight limits on dollar purchases that have cut off vital food and most other imports. The result has been a plunging economy and the world’s highest inflation rate — above 700%.

Because Venezuela imports 70% of the goods it consumes, including most medicine, growing shortages of medicines for such ailments as cancer, diabetes, hypertension and HIV has created dire situations for many.

“My 4-year-old daughter is dying of cancer, and there’s no medicine here to treat her,” said Luis Avila, 42, a farm worker outside this industrial city. “What am I supposed to do? What can I do? Maduro has destroyed this country.”

An epic drought has also gripped this nation that relies mostly on hydroelectric dams, sparking rolling blackouts and water shortages. Hospitals have had to postpone operations and procedures because of power outages. And government employees now work only two days a week to conserve electricity.

“Shortages are just going to get worse in the coming weeks and months, and the government’s bet that they can keep the protests and looting … small-scale seems risky,” said David Smilde, a senior fellow at the Washington Office on Latin America. “Venezuelans are not used to hunger and do not have a lot of respect for Maduro as their leader.”

Voters in Venezuela gave the opposition a landslide victory in December’s congressional elections, and polls now show a majority of the country wants Maduro out as president. His term expires in 2019.

“Venezuela is a bomb that could explode at any moment,” opposition leader Henrique Capriles warned during a Saturday rally.

Maduro, the handpicked successor of the late Hugo Chávez, discounted the chances of a recall referendum being held this year.

“They don’t want a referendum, they want a coup,” Maduro said this week during meeting with foreign journalists. “We have no obligations to hold any type of referendum in this country.”

U.S. State Department spokesman John Kirby said Wednesday that “reports of excessive use of force and violence against protesters obviously is troubling to us … We don’t believe that that response to peaceful protest about real difficulties facing the Venezuelan people is the appropriate response.”

He called Wednesday for “all Venezuelans to try to work together peacefully” to solve the country’s problems.