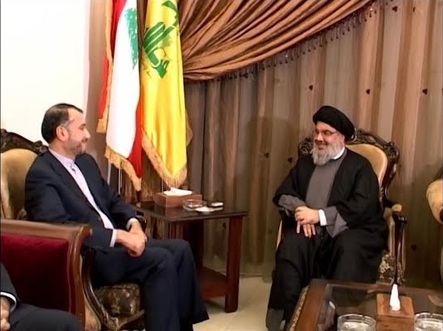 The meeting which took place at undisclosed location comes 3 days after the reported death in Syria of the Hezbollah’s top military chief Mustafa Badreddine.

“Nasrallah told Abdollahian that the takfiris’ (Sunni extremists) attempts to spread chaos in Iraq and Syria are linked to Israel,” al-Mayadeen TV said.

Hezbollah has deployed thousands of fighters in Syria where Badreddine had led its intervention in support of Assad’s forces, which are also backed by Russia and Iran.

Badreddine, who was on a U.S. terror sanctions blacklist and wanted by Israel, was killed in an explosion on Thursday night near Damascus international airport.

Hezbollah announced his death on Friday but without immediately apportioning blame, breaking with its usual pattern of accusing arch-foe Israel of responsibility.

On Saturday, it said a probe had concluded that Sunni Islamist radicals known as “takfiris”, who consider Shiites to be heretics, had killed Badreddine.

“An investigation has shown that the blast that targeted one of our positions near the Damascus international airport that led to the martyrdom of the brother commander Mustafa Badreddine was caused by artillery bombardment carried out by takfiri groups present in that region,” a Hezbollah statement said.

But according to a report by Ya Libnan based on leaks by Israeli military , Israel killed Badreddine with a smart bomb inside a Hezbollah secret room at the Damascus airport .

No one else was heart in the bomb explosion. Hezbollah in cooperation with Iran reportedly decided to blame the so called takfiris to satisfy the fighters in the Syrian battlefield and avoid another battle with Israel