Hezbollah chief Hassan Nasrallah: The Islamic State is a US product 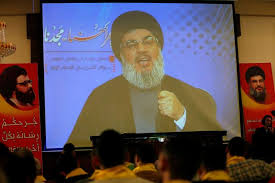 In a speech on Thursday marking the Palestinian “al-Nakbah” (catastrophe or disaster ), Hezbollah leader Hassan Nasrallah denounced the United States in an unprecedented manner.

Nasrallah claimed that the Islamic State is a US product “aimed at destroying the morale and the spirit of “the axis of resistance” in the region ” , namely Iran, Syria and Hezbollah.

“This is not a regional Sunni-Shiite battle, but this is all an attempt to break the rise of resistance movements.”

“They want the Islamic State to reach all of Iran’s borders and even within Iran itself. The IS is a means to achieve U.S. goals as demonstrated through the return of American troops in Iraq.”

Nasrallah alleged that the West has no problem with Islam except for the group of people within it who reject the Israeli occupation of Palestine . The Hezbollah chief also claimed that the US is carrying out a similar “nakba” in the Middle East.

Factors involved in the exodus include Jewish military advances, attacks against Arab villages and fears of more massacres by Zionist militias after the Deir Yassin massacre, which caused many to leave out of panic, expulsion orders by Israeli authorities the collapse in Palestinian leadership.

After the exodus, , a series of laws passed by the first Israeli government prevented the Palestinians from returning to their homes, or claiming their property. They and many of their descendants remain refugees. The expulsion of the Palestinians has since been described by some historians as ethnic cleansing.

According to local analysts Nasrallah’s attack on the US and the bitterness in his voice and his claims reflect the Iranian, Syrian and Hezbollah frustration over the understandings reached by Washington and Moscow over the last few days regarding events in Syria.

These understandings have resulted in the halting of the Russian air support for attacks by the armies of the three allies on the various Syrian fronts. As a result, both the rebels and ISIS have had success in battles against the allies of Syrian President Bashar Assad.

According to AP Al-Qaida linked fighters and other ultraconservative Sunni insurgents seized a predominantly Alawite village in central Syria on Thursday, sparking fears of sectarian violence as families from the village were reported missing by activists.

Syrian Prime Minister Wael al-Halqi was quoted as saying that “terrorists” were killing residents of the village of Zaara, previously controlled by the government. Syrian state media said insurgents had looted and destroyed homes.

Ahrar al-Sham, an ultraconservative Sunni militant group, led the assault on Zaara, along with the Nusra Front, al-Qaida’s Syrian franchise, which often fights alongside opposition factions. The Observatory, which covers both sides of the conflict through a network of local activists, said families disappeared from Zaara after the militants took over.

Addressing the Municipal and mayoral elections in Lebanon Nasrallah emphasized the party’s commitment towards its ally the Free Patriotic Movement .

Addressing the local alliances in the various districts he said: “We are not obligated towards any side that the Free Patriotic Movement chooses to ally itself with during the municipal polls.”

He was referring to FPM’s alliance in the polls with the Lebanese Forces and Phalange Party.

Nasrallah stressed that these alliances seek to serve the people, but that they also have political objectives.

“We ally ourselves with our friends, not our foes, who have not spared any media outlet to slander us. We respect ourselves and our supporters and we do not stab our allies in the back.”

“We hope the next stages of the municipal elections will run as smoothly as the ones held over the weekend,” he added
Beirut and the Bekaa regions witnessed on May 8 the first stage of municipal polls.

The next stage will be held in the Mount Lebanon region on Sunday. They will be followed by polls in the South and Nabatieh on May 22 and the North and Akkar on May 29.