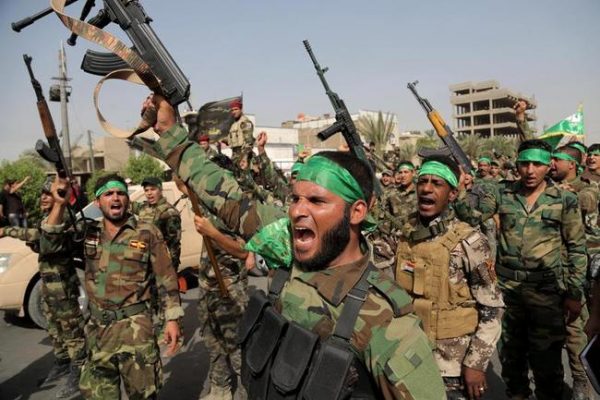 Afghan Shiite militias fighting in Syria in support of the regime
Share:

Around 18,000 Shia militiamen are believed to be fighting alongside the Bashar al-Assad regime in Syria, which has been ravaged by a vicious civil war since 2011, local sources told Anadolu Agency.

The sources, who did not reveal their identities for security concerns, said Shiite  militias were intensively engaged in military operations against opposition forces in the country’s southern part.

According to the sources, around 2,000 Shiite  militiamen are also deployed in the eastern part of Homs and Latakia provinces.

Syria has remained locked in a vicious civil war since early 2011, when the Assad regime cracked down on pro-democracy protests — which erupted as part of the “Arab Spring” uprisings — with unexpected ferocity.

Since then, more than 470,000 people have been killed, according to UN figures. 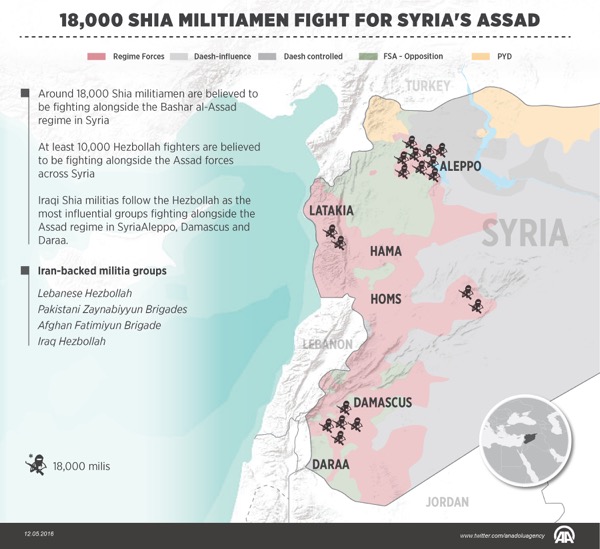 The Syrian conflict has also drawn neighboring Iran, which has deployed forces to back the Assad regime against the heavily-armed opposition forces.

According to Iranian media reports, more than 400 Iranian soldiers have been killed in the fighting in Syria since the conflict began in 2011.

The six-year conflict also drew the Lebanese Shiite group Hezbollah, which is backed by Shiite Iran.

According to estimates, at least 10,000 Hezbollah fighters are believed to be fighting alongside the Assad forces across Syria.

Thousands of Hezbollah fighters are also believed to have been killed in the conflict. The Shiite  group did not confirm the number of their casualties.

Iraqi Shiite  militias follow the Hezbollah as the most influential groups fighting alongside the Assad regime in Syria.

These militias, which are drawn from Iraq’s predominantly Shiite areas of  Baghdad, Najaf and Basra, are estimated to number nearly 5,000.

There are also other militias as Pakistani Zaynabiyyun Brigades, which has more than 500 members and are fighting in the north of Aleppo, and the Afghan Fatimiyun Brigade, which has about 2,000 fighters in south of Aleppo, Damascus and Daraa.

The Assad regime is using local militia groups known as “shabiha” to bolster its forces against the opposition.

The shabiha, which is blamed for the killing of  many anti-Assad protesters, is estimated to be composed of 24,000 members.

In the first year of the conflict, the shabiha militiamen began to replace soldiers deserting the army. Their numbers began to increase significantly as the regime forces lost power.

The shabiha is believed to be funded by pro-regime tribal leaders and businessmen, including Assad’s cousin Rami Makhlouf.