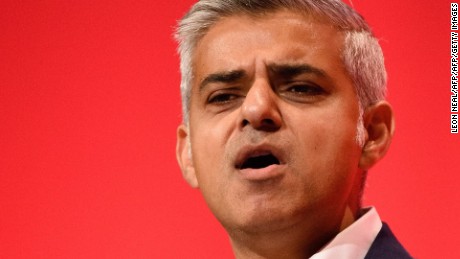 Speaking Wednesday in London, he said American voters faced a decision “of hope over fear, unity over division.”

He continued: “I’m hoping he’s not the guy that wins.”

Khan is the first Muslim mayor of any Western capital.

Wednesday is his third day in office. His election Thursday made headlines around the world, and was followed almost immediately by a spat with the presumptive Republican presidential nominee, who has sparked outrage on the campaign trail with his comments on Islam.

Trump, who earlier proposed a temporary ban on Muslims entering the United States, suggested Monday he would make an “exception” for Khan.

The London mayor quickly shot back, rejecting the suggestion.

“I’m not exceptional,” he told Amanpour. “So for Donald Trump to say, ‘Oh, but Mayor Khan can be allowed, but not the rest,’ is ridiculous.”

He added: “The point is it’s not just about me. It’s about the message it sends from, you know, the greatest country in the world. I mean, what is the story of America? And I think, you know — I think Donald Trump doesn’t get the history of America.”

Khan reiterated his belief that Trump’s views of Islam are “ignorant.”

“By giving the impression that Islam and the West are incompatible, you are playing into the hands of the extremists.”

He continued: “Imagine that America has a sign saying no Muslims: What message does that send to Muslims around the world?”

“I’m the father of two daughters. I’m a proud feminist in City Hall,” he said.

“Just imagine the message it sends to my daughters and to girls around the world that the president of the United States is a woman. Not any old woman, a woman with the gravitas, with the experience, someone who is a unifier.”

Clinton, who congratulated Khan for his win in a tweet Saturday, would be “an inspiration,” he said.

“I’m quite clear in my mind who I want to be the president of the USA.”

Khan told reporters earlier he would be happy for his politics to be a “template” for the American presidential race.

“London could have chosen the politics of fear … chosen the option put forward by my opponents, and they chose not to. If that’s a template for America, I’m really happy to help.”

Speaking to Amanpour, he repeated his accusation that his Conservative rival, Zac Goldsmith, had “used the Donald Trump playbook” by targeting his religion during the bitterly contested London mayoral campaign.

“I’ve never hidden the fact that I’m a Muslim. And to try and seek to divide communities, to try and give the impression that our city may be less safe if I was the mayor … I think that was rejected last week.”

Trump’s remarks about Islam on the campaign trail have provoked a heated response in the United States and abroad.

In the wake of the Paris terror attacks in November, he called for “a total and complete shutdown of Muslims entering the United States until our country’s representatives can figure out what is going on.”