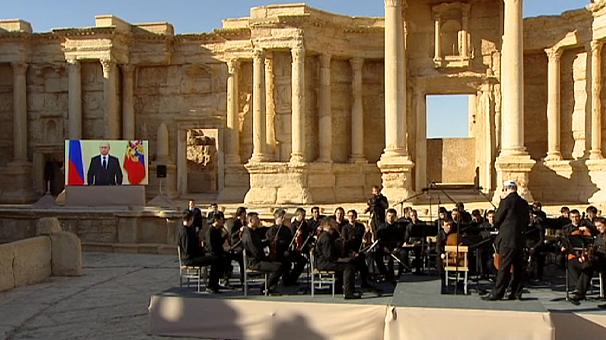 A renowned Russian conductor has led a concert in the ruins of Palmyra in Syria, which were recaptured from the so-called Islamic State (IS) in March.

Last July, IS posted footage online showing some of its fighters carrying out killings in the ancient theatre.

Mr Gergiev led the orchestra through pieces by Johann Sebastian Bach, Sergei Prokofiev and Rodion Shchedrin, in front of a crowd of Russian soldiers, government ministers and journalists.
Pictures of the concert, broadcast on Russian state television, were occasionally interrupted by footage of military action – showing Russian military backing for Syrian government forces as they liberated Palmyra from IS militants.

Mr Gergiev was until recently principal conductor of the London Symphony Orchestra and is music director of the Munich Philharmonic Orchestra.

In 2014, he backed Mr Putin over the annexation of the Crimea from Ukraine. In 2008, he performed in the capital of South Ossetia when Russia and Georgia were fighting over the territory.

The maestro described the concert as a protest against the barbarism and violence exhibited by Islamic State militants who had used the city’s Roman amphitheatre to execute prisoners.
The Russian president also addressed the audience, by video link from his Black Sea residence in Sochi.

He called terrorism a contagion of which the world needed to rid itself, and said the fact the concert was taking place at all was “surprising”.

“Today’s action involved major inconvenience and dangers for everyone, being in a country at war close to where hostilities are still ongoing. That has demanded great strength and personal courage from you all,” he said.

However, UK Foreign Secretary Philip Hammond said the concert was “a tasteless attempt to distract attention from the continued suffering of millions of Syrians. It shows that there are no depths to which the regime will not sink”.

This is about more than just music, says BBC’s Steve Rosenberg

By organising a concert in the ruins of Palmyra, Russia wants the world to see that it is making a positive contribution in Syria: bringing peace and stability to the country, and, in the case of Palmyra, saving a Unesco heritage site.

Moscow will be hoping that images of its classical musicians in Syria will reinforce the message that Russia is a force for good.

Such a musical message will be well received back home. For months now, Russian TV has been assuring viewers Russia’s military intervention in Syria has benefited the world by taking on international terrorism.

But Western officials remain suspicious of Russia’s intentions. Moscow has faced accusations that it has not done enough to rein in Syrian government forces. The Russians deny that and accuse America of not using its influence with the Syrian opposition to halt the fighting.

One of the soloists at the concert was cellist Sergei Roldugin, a friend of Putin’s, who was recently named as the owner of offshore companies in the so-called Panama Papers. He denies all wrongdoing.

Islamic State destroyed a number of monuments during its 10-month occupation of Palmyra and its associated Unesco World Heritage site.

Two 2,000-year-old temples, an arch and funerary towers were left in ruins.

The jihadist group, which has also demolished several pre-Islamic sites in neighbouring Iraq, believes that such structures are idolatrous.

While some treasured monuments were destroyed, much of the historic site was left undamaged. 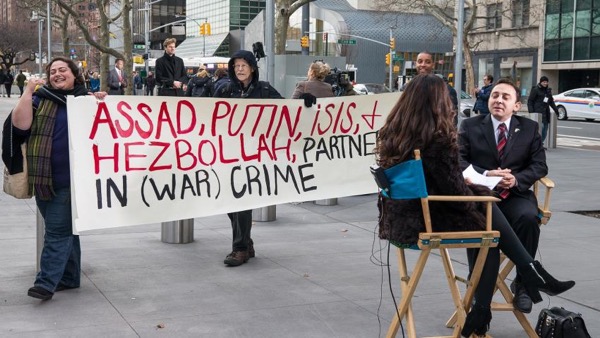 The Islamic State group is closely collaborating with Syrian President Bashar al-Assad’s government, a new cache of leaked documents from the group has revealed, confirming long-held suspicions by opponents.

The Islamic State [IS] group and the Assad regime in Syria have been colluding with each other, says Sky News – who are examining the documents – anywhere from making “tactical withdrawal” deals on the battleground to trading oil and fertilisers.

It has consistently been argued that Assad played a crucial role in the rise of IS and other extremist groups like al-Qaeda-linked Nusra Front. But the new revelations confirm a much more direct role.

Most notably, the much-hyped regime victory in the ancient city of Palmyra against IS seems to have been at least partly the result of a prior arrangement with the extremist group that had been in control of the city.

But the cooperation has been going on for years, the documents handed to Sky News seem to show.

Similar arrangements were apparently agreed in places other than Palmyra, whereby IS militants would withdraw from certain areas before the Syrian army moved in to “recapture” them.

A document written shortly before the Syrian army recaptured the ancient city reads: “Withdraw all heavy artillery and anti-aircraft machine guns from in and around Palmyra to Raqqa province,” in reference to the de-facto capital of the group in eastern Syria.