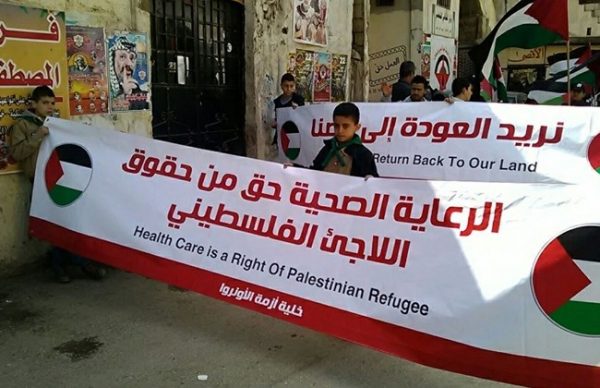 Palestinian refugees protested Thursday   against the  United Nations Relief and Works Agency  (UNRWA) across over their controversial health insurance plan and shut down several  of their offices.

National News Agency said that UNRWA offices were shut down in the northern city of Tripoli, in addition to  in the Ain El Hilweh and Mieh Mieh refugee camps in the south.

In the past months, Palestinians in many of the 12 refugee camps across Lebanon have been protesting UNRWA healthcare reforms.

However, UNRWA argues that this isn’t a cut in service as more funding is now directed toward other areas, including expanded coverage for complex surgery and long-term care. The relief agency now covers 60 percent of tertiary care expenses, up from 50 percent, to a ceiling of $5,000, up from $4,200. They say this shift represents changing health care needs. While many Palestinians believe these changes to the health plan  are part of a bigger plan to cut much-needed aid.