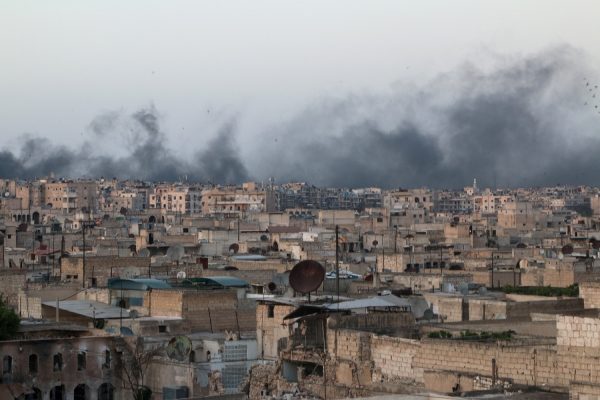 Smoke rises after airstrikes on the rebel-held al-Sakhour neighborhood of Aleppo, Syria April 29, 2016. REUTERS/Abdalrhman Ismail
Share:
A maternity hospital in a government-held section of Aleppo was struck by rocket fire Tuesday as battles killed 20 people and dragged the contested city in northern Syria deeper into chaos for a 12th straight day.

The new bloodshed came as the diplomatic focus moved to Moscow, where the U.N. envoy for Syria raced to restore a partial cease-fire in the civil war that would include Aleppo.

“We need to make sure the cessation of hostilities is brought back on track,” de Mistura said.

Aleppo has been at the center of the conflict for the past two weeks, shattering a limited cease-fire that began in late February. Tuesday’s attack on the Dubeet hospital in the government-held central Muhafaza neighborhood that killed four people echoed an airstrike on a hospital on the rebel-held side of the city that killed about 50 civilians nearly a week ago.

About 280 civilians have died in the city in the last 12 days, according to the Britain-based Syrian Observatory for Human Rights, a monitoring group of local activists.

Rebel shelling of the government side of the city killed 20 people and injured 100, according to Mohammad Hazzouri, the head of the city’s Health Directorate. The Observatory said 19 had died.

The shelling sent panicked residents fleeing from the streets. Many shuttered their businesses and hurried either to pick up children from schools or return home.

A priest at the Arab Evangelical Church offered a bitter appraisal of the reality.

“Aleppo is being slaughtered from vein to vein,” the Rev. Ibrahim Nseir told The Associated Press by telephone from the government-held part of Aleppo. “To all those who consider themselves in favor of human rights, I say that there are no more rights, and no more humans.”

Activists reported government bombardment killed two civilians and wounded several others on the rebel side.

Syrian Information Minister Omran al-Zoubi warned rebels they would face harsh retaliation for shelling civilian areas, saying the government’s “patience is running out, and if they don’t stop targeting civilians in the coming hours … they will pay a high price.”

Direct clashes between government and rebel forces on Aleppo’s outskirts accompanied the shelling inside, foreshadowing a full-scale conflict unless a cease-fire is negotiated.

An opposition media activist outside Aleppo said rebels were waging a counteroffensive against pro-government forces on the western side of the city.

“The revolutionaries launched a counteroffensive against the regime, on a building called the Family House,” al-Khatib said.

He could not confirm reports that the rebels had taken over the compound, a former mall that has turned into a front-line position in the suburb of New Aleppo.

Maj. Jamil Saleh, leader of Tajammu Al-Ezzah army, said his group was fighting in Aleppo. The rebel group, which falls under the Free Syrian Army and has been vetted and receives support by the U.S., ordinarily wages battles in the central province of Hama and in rural Latakia.

“Most of the FSA factions are taking part in the battle in the heart of Aleppo,” he said. “The city is important for all Syrians. It is important economically, militarily and is the commercial capital of Syria. Letting go of Aleppo is a treason to the revolution.”

He said the rebels have repelled the military’s persistent attempts to advance on the city, citing unrelenting government airstrikes in preparation for a large offensive.

“There is an attempt to ward off this attack and repel government forces as much as possible from the front lines and alleviate the pressure for civilians,” he told the AP.

An official with the ultraconservative Ahrar al-Sham group said the Fatah Army, or Army of Conquest coalition, has been revived to carry out military operations in the near future against government forces and their allies in northern Syria, mostly in Aleppo province.

The coalition, which includes Ahrar al-Sham, al-Qaida’s branch in Syria known as the Nusra Front and the Salafi-Jihadi Jund al-Aqsa faction, was one of the most effective forces against President Bashar Assad’s troops last year. It captured wide areas in the northern province of Idlib from government forces.

The Ahrar al-Sham official told the AP via text message that the Fatah Army will carry out an act in Aleppo, but added that the coalition had no role in Tuesday’s attacks. The official gave only his nom de guerre of Abu Ahmad because he was not authorized to talk to reporters.

The coalition was suspended before Syria’s indirect, U.N.-sponsored peace talks resumed in January in Geneva because it included extremists groups such as the Nusra Front that oppose the peace process and the U.N. considers terrorist organizations.

Reviving the coalition would send a message to government forces and their backers that the militants are united.

Also in northern Syria, warplanes carried out intense airstrikes on the city of Raqqa, the de facto capital of the extremist Islamic State group, early Tuesday. Activist groups said it was not clear if the warplanes were Russian or those of the U.S.-led coalition.

The Observatory said there were more than 35 air raids and that 18 people were killed, including five members of the Islamic State group, and dozens were wounded.

The anti-IS group called Raqqa is Being Slaughtered Silently said the airstrikes killed 10 and wounded dozens. Different casualty figures are common in the chaos of Syria’s civil war. The group said there were calls from mosque loudspeakers for blood donations.