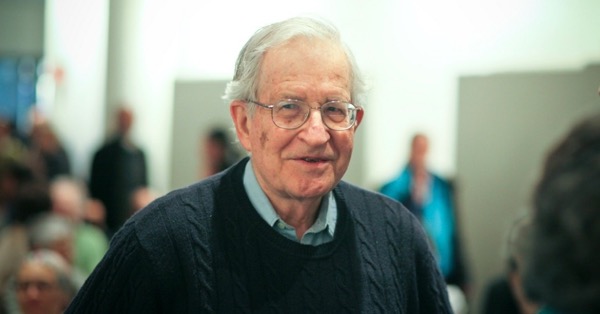 Trump has exposed America for being the ‘failed state’ that it is said Noam Chomsky on April 29
Share:

During an event Tuesday night, Noam Chomsky was asked about Democratic presidential candidate Bernie Sanders and said he considered him more of a “New Deal Democrat” than a radical extremist, as some have portrayed him. Chomsky said Sanders’ positions on taxes and healthcare are supported by a majority of the American public, and have been for a long time. He added that Sanders has “mobilized a large number of young people who are saying, ‘Look, we’re not going to consent anymore.’ If that turns into a continuing, organized, mobilized force, that could change the country—maybe not for this election, but in the longer term.”

Chomsky is a world-renowned political dissident, linguist, author and institute professor emeritus at Massachusetts Institute of Technology, where he’s taught for more than half a century. He spoke at the Brooklyn Public Library at an event hosted by Live from the NYPL.

The event also featured Greece’s former finance minister, Yanis Varoufakis. He discusses his role in the country’s financial crisis in his new book, “And the Weak Suffer What They Must?: Europe’s Crisis and America’s Economic Future.”

Varoufakis will be a guest Thursday on Democracy Now!

This is a rush transcript. Copy may not be in its final form.
NOAM CHOMSKY: Well, Bernie Sanders is an extremely interesting phenomenon. He’s a decent, honest person. That’s pretty unusual in the political system. Maybe there are two of them in the world, you know. But he’s considered radical and extremist, which is a pretty interesting characterization, because he’s basically a mainstream New Deal Democrat. His positions would not have surprised President Eisenhower, who said, in fact, that anyone who does not accept New Deal programs doesn’t belong in the American political system. That’s now considered very radical.

The other interesting aspect of Sanders’s positions is that they’re quite strongly supported by the general public, and have been for a long time. That’s true on taxes. It’s true on healthcare. So, take, say, healthcare. His proposal for a national healthcare system, meaning the kind of system that just about every other developed country has, at half the per capita cost of the United States and comparable or better outcomes, that’s considered very radical. But it’s been the position of the majority of the American population for a long time. So, you go back, say, to the Reagan—right now, for example, latest polls, about 60 percent of the population favor it. When Obama put through the Affordable Care Act, there was, you recall, a public option. But that was dropped. It was dropped even though it was supported by about almost two-thirds of the population. You go back earlier, say, to the Reagan years, about 70 percent of the population thought that national healthcare should be in the Constitution, because it’s such an obvious right. And, in fact, about 40 percent of the population thought it was in the Constitution, again, because it’s such an obvious right. The same is true on tax policy and others.

So we have this phenomenon where someone is taking positions that would have been considered pretty mainstream during the Eisenhower years, that are supported by a large part, often a considerable majority, of the population, but he’s dismissed as radical and extremist. That’s an indication of how the spectrum has shifted to the right during the neoliberal period, so far to the right that the contemporary Democrats are pretty much what used to be called moderate Republicans. And the Republicans are just off the spectrum. They’re not a legitimate parliamentary party anymore. And Sanders has—the significant part of—he has pressed the mainstream Democrats a little bit towards the progressive side. You see that in Clinton’s statements. But he has mobilized a large number of young people, these young people who are saying, “Look, we’re not going to consent anymore.” And if that turns into a continuing, organized, mobilized—mobilized force, that could change the country—maybe not for this election, but in the longer term. 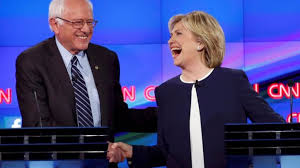 Battered by four defeats in Tuesday night’s primaries, Bernie Sanders is planning to lay off hundreds of campaign staffers across the country and focus much of his remaining effort on winning the June 7 California primary.

The Vermont senator revealed the changes a day after Hillary Clinton’s victories widened her delegate lead and left her all but certain to win the Democratic presidential nomination.

Despite the changes, Mr. Sanders said he would remain in the race through the party’s summer convention and stressed that he hoped to bring staff members back on board if his political fortunes improved. But political experts say the layoffs signal Mr. Sanders is beginning to accept that he will not be the Democratic nominee and is now focused on pulling the party toward a more progressive agenda.

“We want to win as many delegates as we can, so we do not need workers now in states around the country,” Mr. Sanders said in an interview. “We don’t need people right now in Connecticut. That election is over. We don’t need them in Maryland. So what we are going to do is allocate our resources to the 14 contests that remain, and that means that we are going to be cutting back on staff.”

When asked how many people would be let go, Mr. Sanders did not give an exact number but did say, “It will be hundreds of staff members.”