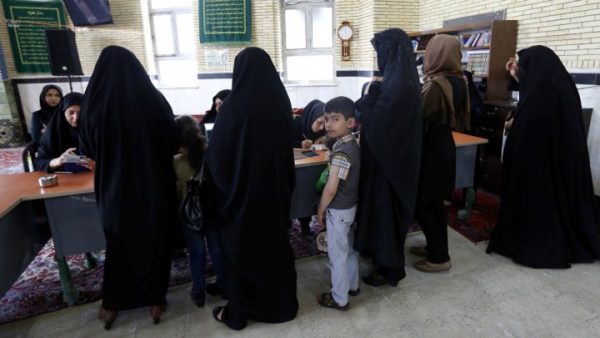 Iranians lined up outside polling stations on Friday to vote in a second round of parliamentary elections, state TV reported, with allies of President Hassan Rouhani seeking to wrest more seats from hardliners.

Rouhani’s moderate and centrist allies made major gains in Feb. 26 elections to parliament and a clerical body that will elect the next Supreme Leader. Buttfailed to win a majority of the 290-member assembly.

“People will vote for 68 undecided seats in constituencies that candidates failed to get 25 percent of votes cast in the first round of the election,” said Interior Minister Abdolreza Rahmani Fazli, state TV reported.

In a major blow to their hardline rivals, moderates won all 30 seats representing the capital city of Tehran in the first round of elections. Rahmani Fazli said the results will be announced by Sunday.

In a statement posted on social media on Sunday, reformist former President Mohammad Khatami called for a high turnout in the second round of elections to “repeat the epic”, a reference to moderates’ big gains in February.

Iranian media are banned from publishing the name or images of Khatami, who was president from 1997 to 2005. But Khatami managed to publish a five-minute video on social media ahead of February vote that changed the balance in favor of moderates.

Khamenei also has called for a high turnout, saying it will display Iranians’ trust in the establishment. The turnout was 62 percent in February.

“The election will end at 1900 (1430 GMT). But it might be extended if necessary. The counting will start immediately after the closure of the polls,” Rahmani Fazli told state TV.

The new parliament will begin its session on May 27. It has no direct control over major policy matters but it can back the policies of Rouhani to bolster the country’s sanction-hit economy.

Sanctions were lifted in January in exchange for curbing Iran’s nuclear programme under a deal reached with major powers in 2015. A moderate-dominated parliament also can influence the re-election of Rouhani as president in 2017.