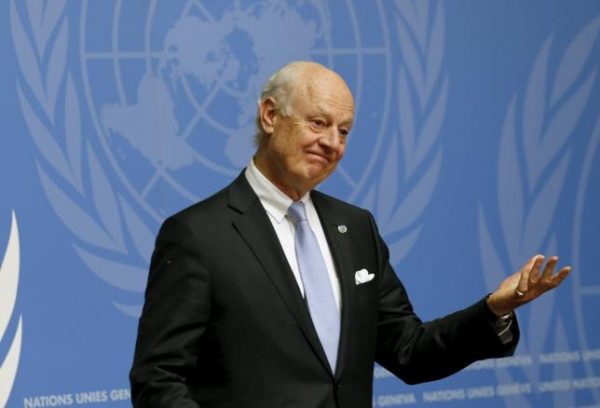 U.N. mediator Staffan de Mistura attends a news conference after the conclusion of a round of meetings during the Syria Peace talks at the United Nations in Geneva, Switzerland, April 28, 2016. REUTERS/Denis Balibouse
Share:

The United Nations mediator called on Thursday on the leaders of the Russia Federation and the United States to salvage the “barely alive” two-month ceasefire in Syria and revitalize the damaged peace process.

U.N. Special Envoy Staffan de Mistura spoke to reporters in Geneva after briefing the Security Council by video-link at the end of a two-week round of talks. The main opposition High Negotiations Committee pulled out of the formal talks a week ago, in protest of intensified fighting and slow aid deliveries.

Referring to the two powers, he said: “There is no reason that both of them which have been putting so much political capital in that success story and have a common interest in not seeing Syria ending up in another cycle of war should not be able to revitalize what they have created and which is still alive but barely.”