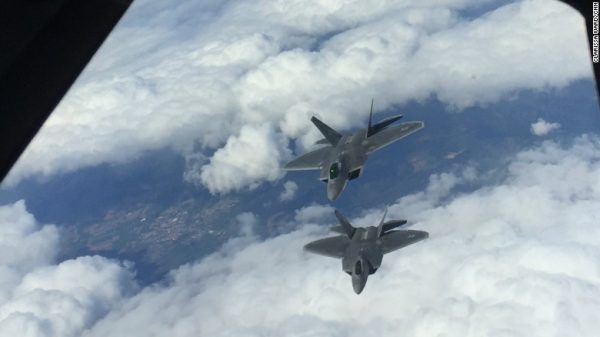 Two of the world’s most advanced warplanes have touched down in Romania for the first time, near the shores of the Black Sea and just a short hop from Ukraine, the Crimean Peninsula and Russia.

Officially it was for a NATO training exercise, part of the Rapid Response program showcasing how effectively and quickly U.S. fighter jets, crews and support can be moved to a forward operating base.

The F-22s are known for speed and stealth.

But it was also a show of strength for NATO allies on the Black Sea, where Russia is rapidly building up its military hardware.

The F-22s are known for speed and stealth — able to travel at twice the speed of sound and hard to spot on radar.

The planes landed at Mihail Kogalniceanu Airport near the Romanian city of Constanta. The transfer from RAF Lakenheath in Eastern England is strategically significant for NATO and its allies, because Constanta is on the Black Sea, close to the Ukrainian border, Crimea and Sevastopol, the home of Russia’s Black Sea fleet.

Russia annexed Crimea from Ukraine in 2014 and has continued military exercises in the area while saying it will spend $2.4 billion to upgrade its naval capacity.

Americans have also been annoyed by Russia recently, most notably with two Russian jets flying extremely close to the USS Donald Cook as it sailed on the Black Sea.

The Cook “encountered multiple, aggressive flight maneuvers by Russian aircraft that were performed within close proximity of the ship,” according to a statement by European Command earlier this month.

One of the Russian jets flew within 30 feet of the Cook’s ship superstructure, according to a U.S. official.

The four-engine KC-135 joined the Air Force fleet in 1956 as both a tanker and cargo jet. It can carry up to 200,000 pounds of fuel and 83,000 pounds of cargo and passengers in a deck above the refueling system. More than 400 of the KC-135s are flown by active, Air Guard and Reserve units.
U.S. Ambassador to Romania Hans Klemm greeted the planes and their crews on Monday. He told reporters the United States and Romania were committed to their partnership in NATO and improving security in the region after “the aggression by Russia that has brought so much instability to this part of the world over the past two to three years.”

Russia has complained that it is NATO, and not Russia, that is responsible for the escalating tensions by pushing up against Russian borders.

The F-22s flew back to Britain a few hours after touchdown to head out to another NATO ally on Wednesday, as the U.S. seeks to offer more reassurance of their presence.