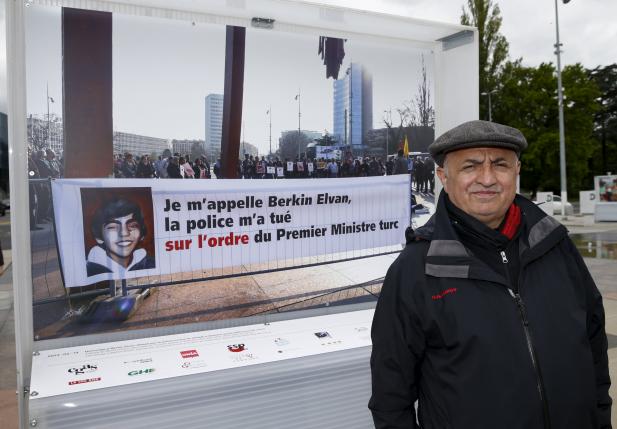 Photographer Demir Sonmez poses in front of his picture, taken during a demonstration March 14, 2014 and showing a banner in support of teenager Berkin Elvan, during an exhibition on the Place des Nations in front of the European headquarters of the United Nations in Geneva, Switzerland, April 26, 2016. The banner reads : “My name is Berkin Elvan, the police killed me on the orders of Turkish Prime Minister”. REUTERS/Denis Balibouse
Share:

Swiss authorities said on Tuesday they had rebuffed a Turkish request to remove a photography installation critical of Turkey’s President Tayyip Erdogan from a public square in front of the U.N. site in Geneva.

The Swiss decision stands in contrast to Germany’s move this month to allow prosecutors to pursue a case against satirist Jan Boehmermann after he recited a crude poem about the Turkish leader on German public television in March.

The art installation by Demir Sonmez, a Kurdish-Armenian photographer who gave up his Turkish nationality in 2005, shows dozens of photographs of demonstrations that have taken place in front of the United Nations in Geneva over recent years.

One photo shows a banner with the face of a boy who died after sustaining injuries at an anti-government protest in Istanbul in 2013. The banner also shows a message blaming Erdogan and his orders to the police for the boy’s death.

The embassy told Swiss broadcaster SRF it respected the freedom of any artist, but said the photo put Erdogan “under suspicion in an unjust and unreal fashion”.

Officials in Turkey were not immediately available to comment.

The city of Geneva said in a statement it stood by the photo exhibition, which includes pictures of protests for and against Israel, for the rights of the Yazidi minority in Iraq and in support of Kurdish militant leader Abdullah Ocalan.

“The exhibition of the photographs is part of defending freedom of expression and underlines Geneva’s position as capital of human rights,” the city’s administrative council said, adding the installation would run until May 1.

Sonmez said he was not surprised by Turkey’s request. “In the end, Turkey shot itself in the foot,” he told Reuters.

Turkish prosecutors have opened more than 1,800 cases against people for insulting Erdogan since he became president in 2014, the justice minister said last month. Those targeted include journalists, cartoonists and even children.

In Germany, Chancellor Angela Merkel’s decision to allow prosecutors to investigate Boehmermann upon Erdogan’s request is opposed by two thirds of Germans, according to an opinion poll.

Merkel was a driving force behind an EU deal with Turkey, which sees Ankara help manage the refugee crisis and be rewarded with financial aid, visa-free travel and progress in its EU membership negotiations.