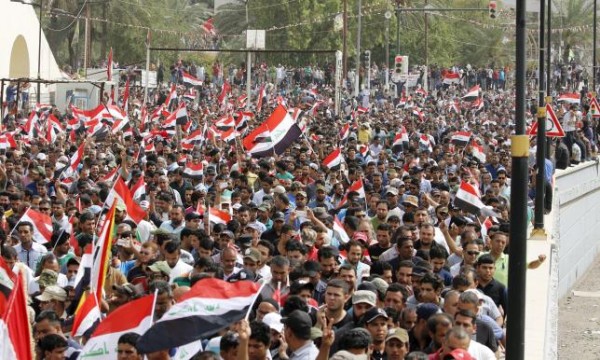 Followers of Iraq’s powerful Shi’ite cleric Moqtada al-Sadr chant slogans during a protest demanding that parliament approves a long-delayed new cabinet and end political and sectarian wrangling that is hampering a vote on the matter at Tahrir Square in Baghdad, Iraq April 26, 2016. REUTERS/Ahmed Saad
Share:

Iraqi Prime Minister Haider al-Abadi attended a heavily scrutinized parliament session on Tuesday after tens of thousands of protesters took over part of central Baghdad demanding a vote on a cabinet reshuffle to fight corruption.

Most of the demonstrators at the gates of the heavily fortified Green Zone housing parliament and foreign embassies were supporters of powerful Shi’ite Muslim cleric Moqtada al-Sadr, who has pressured Abadi to follow through on months-old reform proposals.

The largely peaceful gathering was the biggest in the capital in weeks, with protesters filling a main road stretching nearly two km (1.3 miles) from Tahrir Square to the Green Zone, a Reuters cameraman said.

A parliament session called for by speaker Salim al-Jabouri convened with enough attendees to reach a quorum, despite attempts to block the meeting by around 100 deputies who have been holding a sit-in in and around the main chamber for nearly two weeks, bringing government to a standstill.

Protesting deputies gathered in the parliament cafeteria chanted “illegal” as the session came to order, a Reuters witness said.

Abadi then entered the chamber where Jabouri called for dialogue with the members who were protesting, a state television correspondent said.

Some lawmakers who had halted their sit-in to attend the session said earlier they would only do so in order to vote on a cabinet reshuffle.

“We are present today at parliament to attend a session whose main goal is the cabinet overhaul,” Dhiaa al-Asadi, who heads Sadr’s bloc in parliament, told reporters.

Yet it was not clear whether Abadi, who has presented two new lineups in the past month, would offer a third list on Tuesday or revive some of the previous names.

The protesting lawmakers argue that Jabouri’s session is unconstitutional.

In a widely contested vote this month, they moved to sack him as part of demands to reform a system that allocates positions based on ethnic and sectarian quotas. They have also threatened to take the issue to court.

Abadi, who under reforms of his own announced in February is pushing to replace party-affiliated ministers with technocrats, has warned that the political crisis could hamper the war against Islamic State, which controls swathes of territory in the north and west of the oil-rich country.

Demonstrations in recent weeks have forced some military forces to leave the front lines to secure the capital, according to security sources.

On Tuesday, protesters braving unseasonably hot weather waved Iraqi flags and chanted pro-Sadr slogans as they crossed a bridge over the Tigris River to reach the gates of the Green Zone.