Syrian airstrikes kill at least 25. Cease-fire is in danger of collapsing 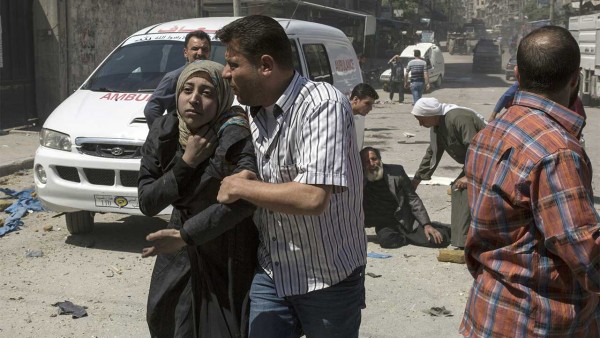 People in a state of shock receive help on a street following a reported airstrike on April 23, 2016 in the rebel-held neighbourhood of Tareeq al-Bab in the northern city of Aleppo.AFP
Share:
Syrian government airstrikes on opposition-held areas near Damascus, Syria’s capital, and in Aleppo on Saturday killed more than two dozen people, according to activists monitoring the conflict.

Western officials have warned that a cease-fire that took effect in February is in danger of collapsing. This past week, an opposition group walked out of the talks in Geneva aimed at finding a political solution to protest the lack of progress and attacks by Syrian government forces.

The government says it is targeting only terrorist groups that are not part of the cease-fire deal.

The United Nations envoy leading the negotiations with the warring parties, Staffan de Mistura, said the talks would continue until Wednesday as planned. But he said the two sides were “extremely polarized,” casting doubt on the possibility of salvaging the talks.

The violence on Saturday was likely only to harden the opposition’s position. Anas al-Abda, the leader of the Turkey-based Syrian National Coalition represented in the Geneva talks, lamented the “limpness” of world powers and international organizations in the face of what he called “massacres” of civilians in Aleppo.

For the second straight day on Saturday, government airplanes pounded neighborhoods in Aleppo held by the opposition.

The airstrikes in rebel-held areas in Aleppo killed at least 12 people, including children, when they hit a residential area and market in the Tareeq al-Bab district, said the Aleppo Media Center, an antigovernment activist group.

Syria’s prime minister, Wael al-Halqi, told Syrian Satellite TV that “terrorist” attacks in the city had killed six people and wounded 25. The pro-government Al-Ikhbariya TV said the Nusra Front and other groups had shelled four government areas in the city.

The Syrian Observatory for Human Rights, a group that monitors the conflict from Britain with the help of a network of contacts in Syria, and the Syrian Press Center, an opposition media outlet, said government shelling of rebel strongholds in Douma, a Damascus suburb, killed at least 13 people on Saturday, including three women and two children.

Syria’s Interior Ministry said mortar shells fired by rebels had fallen in two neighborhoods in Damascus. There were no reported injuries.

The state-news agency SANA said a child had been killed in rebel shelling outside Damascus.